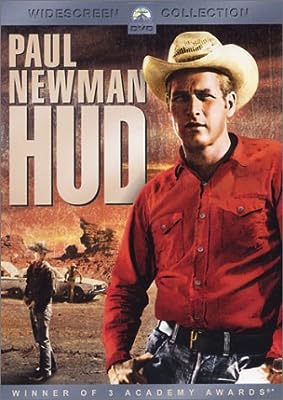 Price: $8.99
As of 2021-07-31 04:26:45 UTC (more info)
Product prices and availability are accurate as of 2021-07-31 04:26:45 UTC and are subject to change. Any price and availability information displayed on http://www.amazon.com/ at the time of purchase will apply to the purchase of this product.
Availability: Not Available - stock arriving soon
Buy Now from Amazon
Product Information (more info)
CERTAIN CONTENT THAT APPEARS ON THIS SITE COMES FROM AMAZON SERVICES LLC. THIS CONTENT IS PROVIDED 'AS IS' AND IS SUBJECT TO CHANGE OR REMOVAL AT ANY TIME.

Having been burned by compromises to censors on his earlier films Cat on a Hot Tin Roof and Sweet Bird of Youth, Paul Newman decided to star in as uncompromising a property as he could find. That property was Hud, inspired by a portion of Larry McMurtry's novel, Horseman Pass By. Hud Bannon (Newman) is a young Texas rancher who lives with his cattleman father Homer (Melvyn Douglas) and his hero-worshipping nephew Lon (Brandon DeWilde). Hud is an amoral, cold-hearted creature; his father, who holds Hud responsible for the death of his other son, tries to imbue Lon with a sense of decency and responsibility to others, but Lon is devoted to Hud and isn't inclined to listen. When hoof-and-mouth disease shows up in one of the elder Bannon's cows, Hud is all for selling the herd before the government inspectors find out. But Homer orders the cattle destroyed (the film's most harrowing sequence), driving an even deeper wedge between himself and Hud. Finally, Hud steps over the line by attempting to rape Alma (Patricia Neal), the earthy but warm-hearted housekeeper. Paul Newman was so repellantly brilliant as an unregenerate heel that his Oscar nomination for Hud was a foregone conclusion. Although Newman lost the Oscar to Sidney Poitier in Lilies of the Field, Oscars did go to Neal for Best Actress, Douglas for Best Supporting Actor, and cinematographer James Wong Howe.

Based on a Larry McMurtry novel, this Martin Ritt film was a testament to the sex appeal of the young Paul Newman. Playing the title character--a total rotter who, by the end of the film, has double-crossed or screwed over everyone he knows, including his hard-working father and brother--Newman turns him into an intriguing antihero. Things are tough on the ranch and Hud's dad (Melvyn Douglas) needs help, but Hud is too busy looking out for number one, even as things fall apart. And guess who's going to land on his feet? Beautiful black-and-white cinematography by James Wong Howe won an Oscar, as did performances by Douglas and Patricia Neal. --Marshall Fine