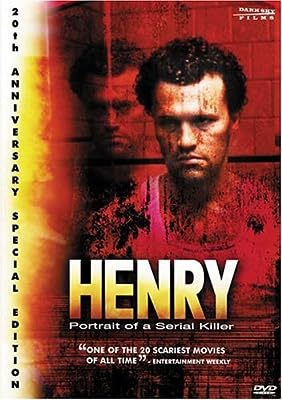 Price: $24.98
As of 2021-10-22 12:42:31 UTC (more info)
Product prices and availability are accurate as of 2021-10-22 12:42:31 UTC and are subject to change. Any price and availability information displayed on http://www.amazon.com/ at the time of purchase will apply to the purchase of this product.
Availability: Not Available - stock arriving soon
Buy Now from Amazon
Product Information (more info)
CERTAIN CONTENT THAT APPEARS ON THIS SITE COMES FROM AMAZON SERVICES LLC. THIS CONTENT IS PROVIDED 'AS IS' AND IS SUBJECT TO CHANGE OR REMOVAL AT ANY TIME.

Ever seen a film so terrifying that it made you want to sleep with all the lights on? A film so unsettling that some of its scenes were stuck in your mind long after you'd finished viewing it? John McNaughton's horrific masterpiece HENRY: PORTRAIT OF A SERIAL KILLER is that kind of film. Based on true events, this critically-acclaimed classic so believably portrays the senseless killing spree of a dangerous sociopath on the loose, Michael Rooker in a bone-chilling performance, that people can't stop talking about it even twenty years after it was filmed. If you've never seen HENRY before, get ready for the ride of your life. If you have seen HENRY and are one if its many fans, you're not going to want to miss this 20th Anniversary Special Edition, which is packed full of never-before-seen extras and is presented here in a stunning new high definition transfer supervised by the director.