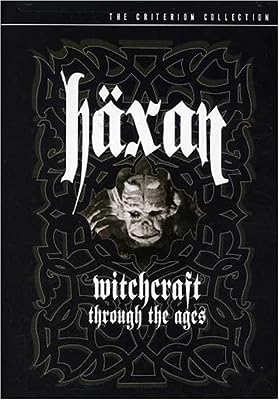 Price: $26.28
As of 2021-10-23 11:42:23 UTC (more info)
Product prices and availability are accurate as of 2021-10-23 11:42:23 UTC and are subject to change. Any price and availability information displayed on http://www.amazon.com/ at the time of purchase will apply to the purchase of this product.
Availability: Not Available - stock arriving soon
Buy Now from Amazon
Product Information (more info)
CERTAIN CONTENT THAT APPEARS ON THIS SITE COMES FROM AMAZON SERVICES LLC. THIS CONTENT IS PROVIDED 'AS IS' AND IS SUBJECT TO CHANGE OR REMOVAL AT ANY TIME.

Grave robbing, torture, possessed nuns, and a satanic Sabbath: Benjamin Christensen's legendary film uses a series of dramatic vignettes to explore the scientific hypothesis that the witches of the middle ages suffered the same hysteria as turn-of-the-century psychiatric patients. But the film itself is far from serious-instead it's a witches' brew of the scary, gross, and darkly humorous. The Criterion Collection is proud to present two versions of this genre-defying "documentary," for the first time ever on DVD.

Witchcraft through the ages is explored with dark wit in this silent classic. Writer-director Benjamin Christensen uses a historical study of witchcraft as a jumping-off point for a fascinating film that is part science, part horror, and part social commentary. This Criterion edition uses a beautiful print, a rearrangement of music from the original Danish premiere, and the original Swedish intertitles (with subtitles). Goodies include commentary by Danish film scholar Casper Tybjerg, the option of watching a narrated version without intertitles, and test shots from the film. The test shots, in particular, give insight into the early filmmaking process, as when Christensen uses his own image to try out (and reject) a flying effect. This is a worthy edition to the collection of fans of horror films, silent films, and film in general. --Ali Davis