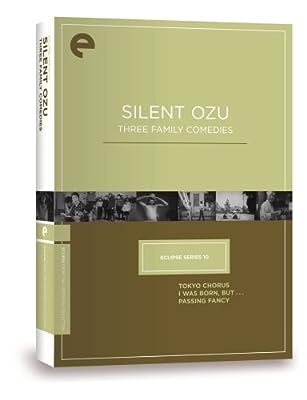 Price: $27.03
As of 2021-05-18 03:36:32 UTC (more info)
Product prices and availability are accurate as of 2021-05-18 03:36:32 UTC and are subject to change. Any price and availability information displayed on http://www.amazon.com/ at the time of purchase will apply to the purchase of this product.
Availability: Not Available - stock arriving soon
Buy Now from Amazon
Product Information (more info)
CERTAIN CONTENT THAT APPEARS ON THIS SITE COMES FROM AMAZON SERVICES LLC. THIS CONTENT IS PROVIDED 'AS IS' AND IS SUBJECT TO CHANGE OR REMOVAL AT ANY TIME.

In the late twenties and early thirties, Yasujiro Ozu was working steadily for Shochiku studios, honing his craft on dozens of silent films in various genres, from romantic melodramas to college comedies to gangster pictures and, of course, movies about families. In these three droll domestic films Tokyo Chorus, I Am Born But..., Passing Fancy Ozu movingly and humorously depicts middle-class struggles and the resentments between children and parents, establishing the emotional and aesthetic delicacy with which he would transform the landscape of cinema.

Tenth in the Eclipse Series, Criterion's effort to reintroduce "lost, forgotten, and overshadowed classics," Silent Ozu includes three early Yasujiro Ozu films that are incredibly entertaining with or without the piano scores offered by Donald Sosin. Ozu, the master of bittersweet family dramas, apparently based later films on these three--Tokyo Chorus (1931), I Was Born But… (1932), and Passing Fancy (1933)--though there is no lack of action, passion, or cinematic revelry in these prototypes. Crafted at Shochiku studios, each film reveals an everyman's struggle to pay bills and raise children. Not only do these movies offer slice-of-life glimpses into 1930s Japan, but they also honor familial roles with humor and respect. It is Ozu's ability to cut from emotional pain to comedy and back again that lends his films such deep humanity. In Tokyo Chorus, a family struggling through unemployment and illness bond during tribulations they face. Shinji Okajima's (Tokihiko Okada) son (Hideo Sugawara) asks for a bike right before Okajima loses his position at an insurance office. Disparities between what is desired and what is provided grow from there. When daughter Miyoko (Hideko Takamine) needs hospitalization, Okajima and his wife stoop lower socially than they wish to make ends meet. The family's determination undercuts their poverty. When Okajima tells his wife, "I feel I'm getting old, I've lost my spirit," she offers to help him pass flyers out to drum up restaurant business where he works. Hilarious scenes, such as when the insurance office workers line up in the loo to secretly peek into cash bonus envelopes, make the most of silent physical comedy. Passing Fancy is similar, though the impoverished father, Kihachi (Takeshi Sakamoto), works to locate a wife to mother his hooligan son.

I Was Born But… is the funniest of the three, with its Little Rascals like attention to the child's point of view. It opens with a shot of car wheels spinning in mud, since Mr. Yoshii (Tatsuo Saito) has just moved his family from suburban Azabu to Tokyo. As Yoshii slaves to improve his employment status, comedic scenes focus on his two sons, Ryoichi (Hideo Sugawara) and Keiji (Tomio Aoki), who continuously ward off local bullies while trying to please their dad. When the boys ditch class to avoid getting beat up, the younger remembers that he was "supposed to get an E in calligraphy today." Lying in a meadow, he does his lesson and recruits a passerby to forge a good grade on his paper. Later, after classmates swallow raw sparrow eggs to impress each other, the two stars feed their eggs to the family dog, accidentally sickening him. Scenes become funnier as tensions build between the parents and their rebellious sons. It is amazing how much Ozu can achieve with so little dialogue, which crops up sparingly printed on cards. One may wonder if sound these days even improves our film viewing experience. In the least, Silent Ozu recalls quieter times, when perhaps just as much narrative was expressed. --Trinie Dalton