Late Autumn / A Mother Should Be Loved [DVD + Blu-ray] 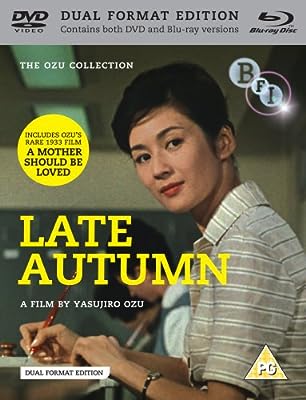 Price: $27.64
As of 2021-05-18 04:43:56 UTC (more info)
Product prices and availability are accurate as of 2021-05-18 04:43:56 UTC and are subject to change. Any price and availability information displayed on http://www.amazon.com/ at the time of purchase will apply to the purchase of this product.
Availability: Not Available - stock arriving soon
Buy Now from Amazon
Product Information (more info)
CERTAIN CONTENT THAT APPEARS ON THIS SITE COMES FROM AMAZON SERVICES LLC. THIS CONTENT IS PROVIDED 'AS IS' AND IS SUBJECT TO CHANGE OR REMOVAL AT ANY TIME.

When college nostalgia inspires a group of middle-aged businessmen to match-make for the widow played with measured dignity by Setsuko Hara (Tokyo Story) of one of their friends and her daughter, they have no idea of the strife their careless interference will cause. Late Autumn's examination of familial upheaval moves effortlessly from comedy to pathos and is amongst the finest of legendary director Yasujiro Ozu's post-war films.

Included here is the surviving version of Ozu's moving silent drama A Mother Should be Loved. Missing both first and last reels the incomplete film nevertheless achieves a dramatic intensity in its portrayal of Sadao, a young man struggling to deal with a disturbing family secret.