An Autumn Afternoon (The Criterion Collection) 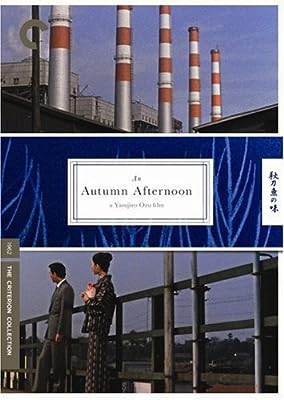 Price: $20.40
As of 2021-05-18 08:54:46 UTC (more info)
Product prices and availability are accurate as of 2021-05-18 08:54:46 UTC and are subject to change. Any price and availability information displayed on http://www.amazon.com/ at the time of purchase will apply to the purchase of this product.
Availability: Not Available - stock arriving soon
Buy Now from Amazon
Product Information (more info)
CERTAIN CONTENT THAT APPEARS ON THIS SITE COMES FROM AMAZON SERVICES LLC. THIS CONTENT IS PROVIDED 'AS IS' AND IS SUBJECT TO CHANGE OR REMOVAL AT ANY TIME.

Yasujiro Ozu's final film is also his final masterpiece, the gently heartbreaking story of a man's dignified resignation to both life s ever-shifting currents and society's gradual modernization. Though widower Shuhei Hirayama (Ozu's frequent leading man Chishu Ryu) has been living comfortably for years with his grown daughter, a series of events leads him to accept and encourage her marriage and departure. As elegantly composed and achingly tender as any of the Japanese master's films, An Autumn Afternoon (Sanna no aji) is one of cinema s fondest farewells. SPECIAL EDITION FEATURES: New, restored high-definition digital transfer, New audio commentary featuring David Bordwell, author of Ozu and the Poetics of Cinema, Excerpts from Yasujiro Ozu and the Taste of Sake, a 1978 French television program looking back on Ozu's career, featuring film critic Michel Ciment, Theatrical trailer, New and improved English subtitle translation, PLUS: A booklet featuring new essays by film scholars Geoff Andrew and Donald Richie

Deceptively breezy, Yasujiro Ozu's final film, made in 1962, is the lovely culmination of the mysterious writer-director's fascination with family, and the social mechanisms by which different generations fulfill obligations to one another and to themselves. The central character, Shuhei Hirayama (Chishu Ryu, Ozu's longtime collaborator), is a 60-ish executive and widower who slowly grows concerned that his 24-year-old daughter, Michiko (Shima Iwashita), has not married because she feels responsible for taking care of him at home. Taciturn, low-key, but affable, Shuhei is a hard man to read. But through his friendships, habits, daily reminders of his past and fear that he might rob his daughter of her youth, Shuhei gradually comes to terms with his responsibility to see Michiko fulfilled and happy. There is also more to it than that: An Autumn Afternoon is also about Shuhei turning a page in his small part in history, the closing chapters of a life that involved military service during World War II and settling into post-war, largely Westernized Japan. These things are all understated, but Ozu gives every character a shape, a recognition that one must play the cards one is dealt without self-deception. With that comes a certain Zen serenity, humor and perhaps melancholy, but in An Autumn Afternoon's spirit of acceptance, a bittersweet life is a good life. Special features on this Criterion release include trailers and excerpts from a French television special about Ozu. --Tom Keogh