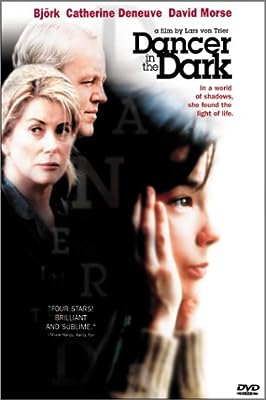 Dancer In The Dark (DVD)

Director Lars von Trier (Breaking the Waves) delivers a provocative mix of drama and musical theater in this acclaimed movie that won 2000 Cannes Film Festival Best Picture and Best Actress honors (for lead actress Björk). Rural factory worker Selma (Björk) is a single mother losing her eyesight from a hereditary disease. To protect her 10-year-old son from the same fate, Selma saves money to get him an operation. At night, Selma escapes into a world where “nothing dreadful ever happens,” rehearsing a production of The Sound of Music with her best friend (Catherine Deneuve). But when a neighbor (David Morse) betrays her trust, Selma’s life unravels – and the lines between reality and fantasy blur. Peter Stormare and Joel Grey also star in this trailblazing concoction that will make you cry at the same time it makes your heart sing.

Masterpiece or masquerade? Lars von Trier's digicam musical split the critics in two when it debuted at Cannes in 2000. There were those who saw it as a cynical shock-opera from a manipulative charlatan, others wept openly at its scenes of raw emotion and heart-rending intensity. There is, however, no in-between. Dancer in the Dark is that rarest of creatures, a film that dares to push viewers to the limits of their feelings.

In her first and most probably last screen performance (she has foresworn acting after her bruising on-set rows with von Trier), brittle Icelandic chanteuse Björk plays Selma, a Czech immigrant living in a folksy American small town with her young son, Gene. Selma is going blind and so will Gene if she does not arrange an important operation for him. To cover the expense, Selma works every hour she can, cheating on her eye tests so she can keep working at the local factory long after her vision has become too unreliable to work safely. She sublets a house from a local cop, Bill (David Morse), and his wife, Linda (Cara Seymour). When nearly bankrupt Bill asks Selma for a loan, she refuses, but he later returns and steals the money, which she demands back in a furious confrontation. In the ensuing melee, Bill is fatally shot and Selma is arrested and put on trial. Will justice prevail?

Von Trier's passionate, provocative film runs all our emotional resources dry with suspense, giving us occasional flashes into Selma's gold heart and mind with superb song-and-dance numbers she conjures to banish the nightmare (Björk also wrote the score). At some two-and-a-half hours, it's not for lightweights, but anyone bored with today's smug, "ironic" cinema will relish this as an astonishing assault on the senses and a stark reminder of von Trier's uncompromising talent. --Damon Wise