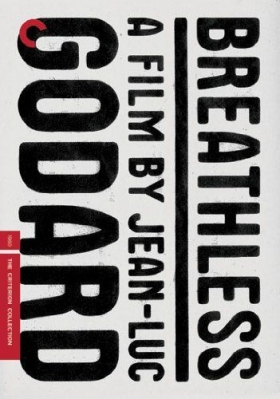 Price: $59.88
As of 2022-10-05 14:33:46 UTC (more info)
Product prices and availability are accurate as of 2022-10-05 14:33:46 UTC and are subject to change. Any price and availability information displayed on http://www.amazon.com/ at the time of purchase will apply to the purchase of this product.
Availability: Not Available - stock arriving soon
Buy Now from Amazon
Product Information (more info)
CERTAIN CONTENT THAT APPEARS ON THIS SITE COMES FROM AMAZON SERVICES LLC. THIS CONTENT IS PROVIDED 'AS IS' AND IS SUBJECT TO CHANGE OR REMOVAL AT ANY TIME.

There was before Breathless, and there was after Breathless. With its lack of polish, surplus of attitude, crackling personalities of rising stars Jean-Paul Belmondo and Jean Seberg, and anything-goes crime narrative, Jean-Luc Godard's debut fashioned a simultaneous homage to and critique of the American film genres that influenced and rocked him as a film writer for Cahiers du cinema. Jazzy, free-form, and sexy, Breathless (A bout de souffle) helped launch the French new wave and ensured cinema would never be the same.

Being John Malkovich (The Criterion Coll...