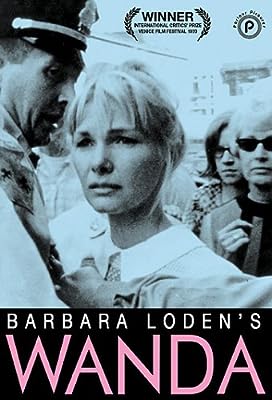 Price: $24.95
As of 2022-10-02 03:22:43 UTC (more info)
Product prices and availability are accurate as of 2022-10-02 03:22:43 UTC and are subject to change. Any price and availability information displayed on http://www.amazon.com/ at the time of purchase will apply to the purchase of this product.
Availability: Not Available - stock arriving soon
Buy Now from Amazon
Product Information (more info)
CERTAIN CONTENT THAT APPEARS ON THIS SITE COMES FROM AMAZON SERVICES LLC. THIS CONTENT IS PROVIDED 'AS IS' AND IS SUBJECT TO CHANGE OR REMOVAL AT ANY TIME.

An overlooked landmark of 70's American cinema, Barbara Loden's WANDA is a radical revisioning of the road movie genre. Writer-director Loden (wife of famed director Elia Kazan) stars as Wanda, a troubled young woman adrift in a modern-day industrial wasteland until she embarks on a crime spree with a small-time crook (Michael Higgins). Bracingly honest and beautifully shot, Loden's unique film deserves to be counted among the most formidable debuts in independent American cinema.

Back to the Future