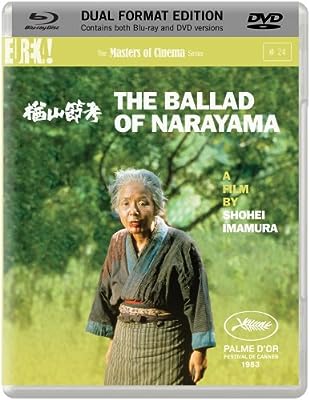 Price: $137.95
As of 2022-11-29 12:58:21 UTC (more info)
Product prices and availability are accurate as of 2022-11-29 12:58:21 UTC and are subject to change. Any price and availability information displayed on http://www.amazon.com/ at the time of purchase will apply to the purchase of this product.
Availability: Not Available - stock arriving soon
Buy Now from Amazon
Product Information (more info)
CERTAIN CONTENT THAT APPEARS ON THIS SITE COMES FROM AMAZON SERVICES LLC. THIS CONTENT IS PROVIDED 'AS IS' AND IS SUBJECT TO CHANGE OR REMOVAL AT ANY TIME.

Cinematic anthropologist extraordinaire Shôhei Imamura won his first Palme d'Or at the 1983 Cannes Film Festival for The Ballad of Narayama [Narayama bushikô], his transcendent adaptation of two classic stories by Shichirô Fukazawa. In a small village in a remote valley where the harshness of life dictates that survival overrules compassion, elderly widow Orin is approaching her 70th birthday - the age when village law says she must go up to the mythic Mount Narayama to die. But there are several loose ends within her own family to tie up first. A vividly realised inverse image of "civilised" society, The Ballad of Narayama presents a bracingly unsentimental rumination on mortality and an engrossing study of a community's struggles against the natural elements. It is one of the legendary director's deepest, richest works, and ranks among the finest films of its decade. The Masters of Cinema Series is proud to finally present the film's first UK home viewing release in a new Dual Format edition.