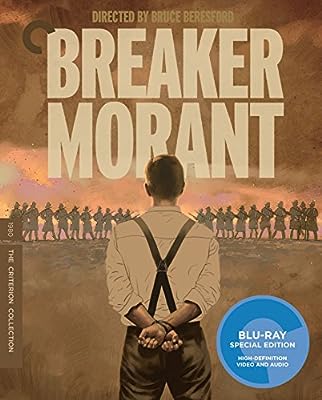 Price: $27.99
As of 2022-10-01 06:02:08 UTC (more info)
Product prices and availability are accurate as of 2022-10-01 06:02:08 UTC and are subject to change. Any price and availability information displayed on http://www.amazon.com/ at the time of purchase will apply to the purchase of this product.
Availability: Not Available - stock arriving soon
Buy Now from Amazon
Product Information (more info)
CERTAIN CONTENT THAT APPEARS ON THIS SITE COMES FROM AMAZON SERVICES LLC. THIS CONTENT IS PROVIDED 'AS IS' AND IS SUBJECT TO CHANGE OR REMOVAL AT ANY TIME.

At the turn of the twentieth century, three Australian army lieutenants are court-martialed for alleged war crimes committed while fighting in South Africa. With no time to prepare, an Australian major, appointed as defense attorney, must prove they were just following the rules of war and are being made into political pawns by the British imperial command. Director Bruce Beresford (Driving Miss Daisy) garnered international acclaim for this riveting drama set during a dark period in his country’s colonial history, and featuring passionate performances by Edward Woodward (The Wicker Man), Bryan Brown (The Thorn Birds), and Jack Thompson (Merry Christmas Mr. Lawrence); rugged cinematography by Donald McAlpine (Moulin Rouge); and an Oscar-nominated script, based on true events. DIRECTOR-APPROVED BLU-RAY SPECIAL EDITION FEATURES  • New 4K digital restoration, supervised and approved by director Bruce Beresford, with uncompressed monaural soundtrack • Audio commentary featuring Beresford from 2004 • New interviews with Beresford, cinematographer Donald McAlpine, and actor Bryan Brown • Interview with actor Edward Woodward from 2004 • New piece about the Boer War with historian Stephen Miller • 1974 documentary The Breaker, profiling the real Harry “Breaker” Morant, plus a 2010 statement by its director, Frank Shields • Trailer • PLUS: An essay by film scholar Neil Sinyard