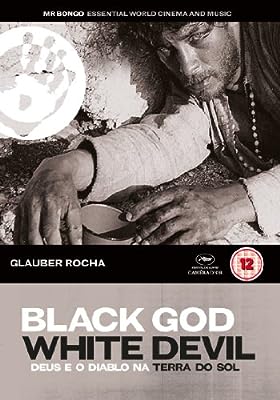 Price: $22.99
As of 2022-10-03 00:30:26 UTC (more info)
Product prices and availability are accurate as of 2022-10-03 00:30:26 UTC and are subject to change. Any price and availability information displayed on http://www.amazon.com/ at the time of purchase will apply to the purchase of this product.
Availability: Not Available - stock arriving soon
Buy Now from Amazon
Product Information (more info)
CERTAIN CONTENT THAT APPEARS ON THIS SITE COMES FROM AMAZON SERVICES LLC. THIS CONTENT IS PROVIDED 'AS IS' AND IS SUBJECT TO CHANGE OR REMOVAL AT ANY TIME.

Wanted for killing his boss, Manuel (Geraldo del Rey) flees with his wife Rosa (Yona Magalhaes) to the sertao, the barren landscape of Northern Brazil. Thrust into a primordial violent region, Manuel and Rosa come under the influence and control of a series of frightening figures. Sebastiao (Lidio Silva), a fanatic preacher who promises utopia but practices massacre and a band of bandits called Cangaceiros led by Corisco (Othon Bastos). Shuttled between the 'Black God' and 'White Devil', Manuel and Rosa's struggle for survival escalates when Church authorities hire a hitman named Antonio das Mortes (Mauricio do Valle) to hunt down every combatant in the region.

'An idea in the head and a camera in the hand' was Glauber Rocha's motto, and every shot in this film displays innovation of thought and control over form. In addition to writing and directing the film, Rocha wrote the folk songs scored by Heitor Villa-Lobos and Sergio Ricardo. Black God, White Devil became the banner film of Brazil's Cinema Novo movement. Its artistic achievement, acknowledged by Luis Buñuel and Bernardo Bertolucci, has made it a seminal classic of film history.