Bigger Than Life (The Criterion Collection) 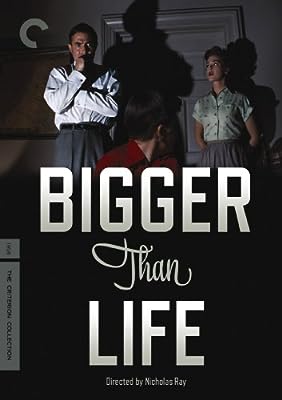 Price: $24.02
As of 2022-10-04 11:37:11 UTC (more info)
Product prices and availability are accurate as of 2022-10-04 11:37:11 UTC and are subject to change. Any price and availability information displayed on http://www.amazon.com/ at the time of purchase will apply to the purchase of this product.
Availability: Not Available - stock arriving soon
Buy Now from Amazon
Product Information (more info)
CERTAIN CONTENT THAT APPEARS ON THIS SITE COMES FROM AMAZON SERVICES LLC. THIS CONTENT IS PROVIDED 'AS IS' AND IS SUBJECT TO CHANGE OR REMOVAL AT ANY TIME.

Nicholas Ray's Bigger Than Life is a great American film long esteemed overseas but little known in its own land. That should change with this addition to the Criterion Collection--the film's first-ever U.S. video release, and a paradigm of what Criterion exists to do. James Mason (who also produced the picture) is wonderfully subtle in an unlikely role, a Middle American schoolteacher named Ed Avery who's afflicted with a rare inflammation of the arteries. Only experimental hormone treatment can save the man from increasing pain and early death--but misuse of the drug leads to a darkening and distortion of his gentle personality and a nightmare situation for his family. Bigger Than Life isn't a cautionary lesson in the perils of "miracle drugs," even if its genesis was a New Yorker article about a real-life case of cortisone abuse. Instead, consider the film as an adult, flip-side variant of Ray's Rebel Without a Cause (made the year before): an EKG of the American middle class in the Eisenhower era. The medical issues on the surface pale beside, in Jonathan Lethem's phrase, "the anxieties just under the skin of the film"--the personal, cultural, and socio-economic dilemmas that mostly remain unspoken, and unanswerable.

The picture is a landmark in the evolution of CinemaScope. Ray was among the first directors to explore the possibilities the wide screen held for psychological and emotional expressiveness (as opposed to mere pictorialism and spectacle), and he uses it brilliantly even though most of the film transpires within a middle-class home. The house is cunningly designed and visualized to seem commonplace, and probably '50s audiences in America registered it that way--just another glance at their everyday reality--while foreign audiences saw lucid and powerful abstraction. Ray invests every sector with dynamic potentiality and meaning, including the acre of thicket and scrub out back that realistically shouldn't be there a stone's throw from the Averys' picture-perfect suburban street. Add the director's bold use of color to underscore the disquiet and intensify the emotional environment, and we have an exemplary modern film. This comes through all the more strongly on the DVD and especially in Blu-ray; the home screen enhances both the abstraction and the specificity of Ray's vision. In the meticulous digital restoration of the original camera negative, the colors are more crisply and definitively there than in any shopworn repertory print or standard TV broadcast. --Richard T. Jameson

Berlin, Symphony of a Great City