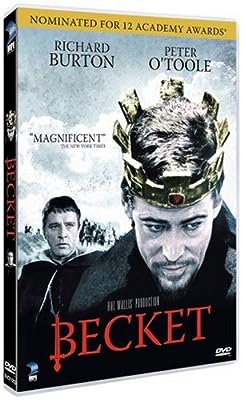 Price: $24.98
As of 2022-11-27 16:43:51 UTC (more info)
Product prices and availability are accurate as of 2022-11-27 16:43:51 UTC and are subject to change. Any price and availability information displayed on http://www.amazon.com/ at the time of purchase will apply to the purchase of this product.
Availability: Not Available - stock arriving soon
Buy Now from Amazon
Product Information (more info)
CERTAIN CONTENT THAT APPEARS ON THIS SITE COMES FROM AMAZON SERVICES LLC. THIS CONTENT IS PROVIDED 'AS IS' AND IS SUBJECT TO CHANGE OR REMOVAL AT ANY TIME.

King Henry II argues over church and state with Thomas a Becket in the 12th century after naming him archbishop of Canterbury.

The primary bonus feature is a treat: a feature-length commentary by Peter O'Toole, accompanied by a moderator. With only occasional gaps of silence, the still sharp and well-spoken O'Toole recalls the making of the film, how he didn't research the historical King Henry ("The author has made the character; that's his job. My job is to play it."), and his memories of Richard Burton, both personal ("We found that we both enjoyed rugby, we both enjoyed songs, and we both enjoyed drinking, and got along very well.") and professional ("he had an astonishing presence on the stage"). There are also two archival interviews with Burton from 1967 and 1977 (26 minutes total), in which he doesn't discuss Becket, but he does say a lot about his life on stage, he recites some lines, and speaks candidly about his drinking problem.

Don't skip over the interviews with the film's editor Anne Coates and composer Laurence Rosenthal. Coates (7 minutes) has some good stories, and Rosenthal (12 minutes) discusses the influences on his Oscar-nominated score and how he had to teach Gregorian chant to Burton ("He was one of these people whom you really can't teach anything. He had this characteristic that you can only remind him of something he already knows. But he didn't know how to sing Gregorian chant."). In addition to a photo gallery and the four-and-a-half-minute theatrical trailer, MPI's long-delayed DVD looks better than many major-studio classics. --David Horiuchi