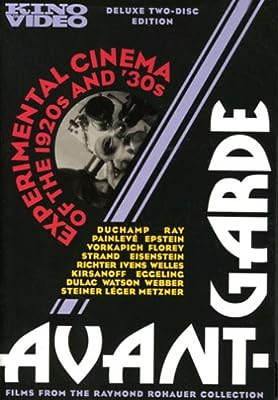 Price: $29.98
As of 2021-09-25 22:24:55 UTC (more info)
Product prices and availability are accurate as of 2021-09-25 22:24:55 UTC and are subject to change. Any price and availability information displayed on http://www.amazon.com/ at the time of purchase will apply to the purchase of this product.
Availability: Not Available - stock arriving soon
Buy Now from Amazon
Product Information (more info)
CERTAIN CONTENT THAT APPEARS ON THIS SITE COMES FROM AMAZON SERVICES LLC. THIS CONTENT IS PROVIDED 'AS IS' AND IS SUBJECT TO CHANGE OR REMOVAL AT ANY TIME.

In the latter half of the 20th Century, Raymond Rohauer was one of the nation's foremost proponents of experimental cinema. Programming diverse films at the Coronet Theatre in Los Angeles, and making the films in his personal archive available for commercial distribution, he helped preserve and promote avant-garde cinema. This two-DVD collection assembles some of the most influential and eclectic short films in the Rohauer Collection, including works by Man Ray, Hans Richter, Marcel Duchamp, Watson & Weber, Fernand Leger, Joris Ivens, Dimitri Kirsanoff, Jean Epstein and Orson Welles.