Simon of the Desert (The Criterion Collection) 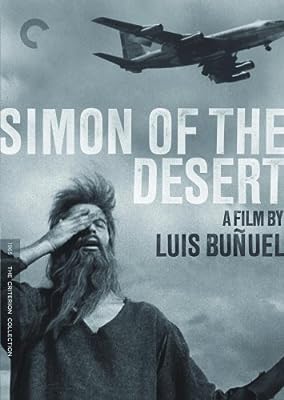 Price: $24.95
As of 2023-02-02 12:18:52 UTC (more info)
Product prices and availability are accurate as of 2023-02-02 12:18:52 UTC and are subject to change. Any price and availability information displayed on http://www.amazon.com/ at the time of purchase will apply to the purchase of this product.
Availability: Not Available - stock arriving soon
Buy Now from Amazon
Product Information (more info)
CERTAIN CONTENT THAT APPEARS ON THIS SITE COMES FROM AMAZON SERVICES LLC. THIS CONTENT IS PROVIDED 'AS IS' AND IS SUBJECT TO CHANGE OR REMOVAL AT ANY TIME.

Simon of the Desert is Luis Buñuel's wicked and wild take on the life of devoted ascetic Saint Simeon Stylites, who waited atop a pillar surrounded by a barren landscape for six years, six months, and six days, in order to prove his devotion to God. Yet the devil, in the figure of the beautiful Silvia Pinal, huddles below, trying to tempt him down. A skeptic s vision of human conviction, Buñuel's short and sweet satire is one of the master filmmaker's most renowned works of surrealism.

Simon of the Desert, the last of Luis Buñuel's 20 Mexican films, is one of the pioneer Surrealist's sublime provocations. In Buñuel's re-imagining of the legend of St. Simeon Stylites--the 5th-century ascetic who passed 40 years atop a pillar in the Syrian desert--we first encounter the holy man as he's upgrading from his original modest pedestal to a 28-foot column six years, six weeks, and six days (666!) into his desert solitude. Viewers of Viridiana, Nazarín, and other Buñuel glosses on Catholicism won't be surprised that dogma and piety get short shrift, or that the saint's relentless self-abnegation is tinged with moral superiority and a disdain for his fellow humans. Towering against the sky (and towering all the more in the person of Claudio Brook, the gaunt butler in The Exterminating Angel), Simón heroically resists multiple temptations by Beelzebub-as-blond-hottie (Silvia Pinal, the once and virginal Viridiana) and such blackly comic distractions as exploding frogs, the Devil's motorized coffin, and a dwarf goatherd enamored of his flock. The film's triumph lies in the disarming plainness of Buñuel's style, his masterly use of the spare setting and an almost functional-seeming camera to locate surreality in the mundane.

Simón's ritual ordeal ends abruptly in a wildly anachronistic coda, a stroke as brilliant as it is zany ... though how much that was Buñuel's original intention is open to question. The picture runs a mere 45 minutes. In his memoir Buñuel says that producer Gustavo Alatriste "ran into some unfortunate financial problems ... and I had to cut a full half of the film." Alternatively, in a 2006 interview conducted for this Criterion release, Silvia Pinal claims that she and her producer-husband Alatriste had the notion to make an omnibus film starring her in all three short-story episodes: Buñuel's, plus a segment directed by Federico Fellini, plus another by Jules Dassin. Then Fellini and Dassin each proposed casting their actress-wives (Giulietta Masina and Melina Mercouri, respectively) instead of Pinal, so only Buñuel's episode got made. Whichever explanation is true, Simon at 45 minutes is more movie than most films of conventional length, and its unclassifiability as either feature or short subject seems like yet another Buñuelian jest. (U.S. art-house exhibitors in 1969 paired Simon with Orson Welles's 58-minute The Immortal Story to create a viable feature-length program.)

Also on the disc
Filling out the Criterion disc is A Mexican Buñuel, an hourlong 1997 documentary focusing on the director's life in Mexico and how he managed to do his unorthodox thing in that country's commercial cinema from 1947 to 1965. Emilio Maillé's film includes testimony from frequent screenwriting partner Luis Alcoriza (Sancho Panza to Buñuel's Don Quixote, according to Carlos Fuentes), editor Carlos Savage, and actors Roberto Cobo (the horrific Jaibo in Los olvidados, quite delightful in old age), Ernesto Alonso (Archibaldo de la Cruz), and Katy Jurado, among others. All remember their director as "brusque but cordial, always joking," and we hear how he demanded that the great Gabriel Figueroa, cinematographer of Simon of the Desert and other key Buñuel films, forgo the dramatic storm-sky style for which he was celebrated. There are also passages with Buñuel's wife of half a century (with whom he never talked about his work) and clips from a '60s Buñuel interview conducted in English ("I am the black humor!"). Alcoriza speaks of himself and Buñuel as "atheists intrigued by religion," and the film is framed by images of a 1997 attempt to reclaim Simón's column from the peasant's field where it lay for 32 years, taking up ground that might otherwise support "four or five stalks of corn." --Richard T. Jameson

Stills from Simon of the Desert (Click for larger image)