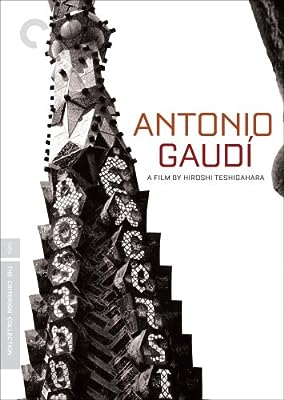 Price: $39.95
As of 2021-03-02 13:12:12 UTC (more info)
Product prices and availability are accurate as of 2021-03-02 13:12:12 UTC and are subject to change. Any price and availability information displayed on http://www.amazon.com/ at the time of purchase will apply to the purchase of this product.
Availability: Not Available - stock arriving soon
Buy Now from Amazon
Product Information (more info)
CERTAIN CONTENT THAT APPEARS ON THIS SITE COMES FROM AMAZON SERVICES LLC. THIS CONTENT IS PROVIDED 'AS IS' AND IS SUBJECT TO CHANGE OR REMOVAL AT ANY TIME.

Catalan architect Antonio Gaudí (1852 1926) designed some of the world s most astonishing buildings, interiors, and parks; Japanese director Hiroshi Teshigahara constructed some of the most aesthetically audacious films of the second half of the twentieth century. Here, their artistry melds in a unique, enthralling cinematic experience. Less a documentary than a visual poem, Teshigahara s ANTONIO GAUDI takes viewers on a tour of Gaudí s truly spectacular architecture, including his massive still-unfinished masterpiece, the Sagrada Familia cathedral, in Barcelona. With camerawork as bold and sensual as the curves on his subject s organic surfaces, Teshigahara immortalizes Gaudí on film.