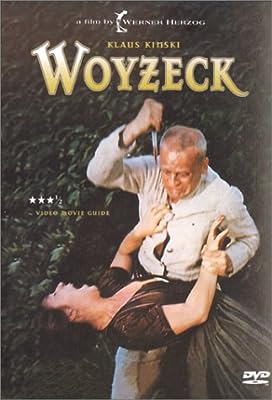 Price: $19.98
As of 2021-09-26 19:43:20 UTC (more info)
Product prices and availability are accurate as of 2021-09-26 19:43:20 UTC and are subject to change. Any price and availability information displayed on http://www.amazon.com/ at the time of purchase will apply to the purchase of this product.
Availability: Not Available - stock arriving soon
Buy Now from Amazon
Product Information (more info)
CERTAIN CONTENT THAT APPEARS ON THIS SITE COMES FROM AMAZON SERVICES LLC. THIS CONTENT IS PROVIDED 'AS IS' AND IS SUBJECT TO CHANGE OR REMOVAL AT ANY TIME.

Klaus Kinski, Eva Mattes. A German Army orderly descends into madness-and murder-after being worked to exhaustion by an officer and scorned by the prostitute he loves. Based on the play by Georg B++chner. 1978/color/80 min/NR/German/subtitled.

The films of Werner Herzog are often marked by physically punishing circumstances that test the endurance of the characters. In Woyzeck, based on the classic German expressionist play by Georg Buchner, all the punishment is within. Klaus Kinski stars as Woyzeck, a disturbed soldier subjected to dubious scientific experiments and maltreatment from his superiors. His only solace is his lover, Marie (Eva Mattes)--so when he begins to suspect her of infidelity, his jealousy swiftly turns murderous. The movie is shot with unusual simplicity, often in long sustained shots that demand focused, disciplined performances. Both of the main actors rose to the task; Mattes was awarded Best Supporting Actress at the Cannes Film Festival and Kinski creates a harrowing portrait of fragile desperation. It's a reminder that, though best known for his volcanic frenzies, Kinski could vividly portray all sides of the human condition. --Bret Fetzer