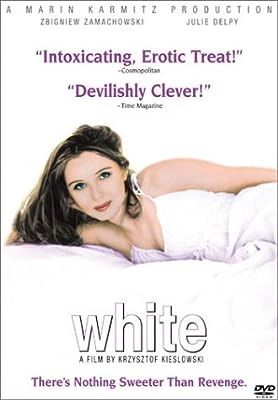 Price: $9.98
As of 2023-02-01 07:45:00 UTC (more info)
Product prices and availability are accurate as of 2023-02-01 07:45:00 UTC and are subject to change. Any price and availability information displayed on http://www.amazon.com/ at the time of purchase will apply to the purchase of this product.
Availability: Not Available - stock arriving soon
Buy Now from Amazon
Product Information (more info)
CERTAIN CONTENT THAT APPEARS ON THIS SITE COMES FROM AMAZON SERVICES LLC. THIS CONTENT IS PROVIDED 'AS IS' AND IS SUBJECT TO CHANGE OR REMOVAL AT ANY TIME.

Three Colors: White is Krzysztof Kieslowski’s center film of his Three Color trilogy, and if it isn't the oddest of the three, it is definitely the most underrated and sublime. The Three Color Trilogy corresponds to the three hues of the French tricolor, and also to the French national principles of liberty, equality, and fraternity. White, is generally said to be an anti-comedy, just as Blue is said to be an anti-tragedy, and Red is an anti-romance. Krzysztof's darkly humorous and sardonic Three Colors: White tells the story of a sexually potent Polish hairdresser who has reached the bottom of the barrel and pathetically tries to make money by performing in the Paris Metro by using his pocket comb as an instrument to inspire donations. He has barely survived a humiliating divorce, and is so desperately homesick in Paris that he devises a plan to be sent back to Warsaw by curling up in inside a suitcase.

A seductive story of love and obsession, WHITE won nationwide critical acclaim for its intoxicating blend of eroticism and intrigue. Directed by acclaimed director Krzysztof Kieslowski (BLUE, RED, THE DOUBLE LIFE OF VERONIQUE), and featuring sexy Julie Delpy (TV's ER, THE THREE MUSKETEERS, AN AMERICAN WEREWOLF IN PARIS), WHITE is the mysterious tale of a man whose life disintegrates when his beautiful wife of six months deserts him. Forced to begin anew, he rebuilds his life, only to plan a dangerous scheme of vengeance against her! Winner of the Best Director Award at the Berlin Film Festival, WHITE is a story of dark, illicit passions -- one of the year's most provocative big-screen releases!

The most playful and the grittiest of Kielowski's Three Colors films follows the adventures of Karol Karol, a Polish immigrant living in France. The hapless hairdresser opts to leave Paris for his native Warsaw when his wife sues him for divorce and frames him for arson after setting her own salon ablaze. White manages to be both a ticklish dark comedy and a sublime reverie about twisted love.