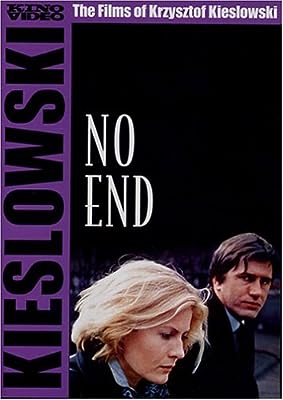 Price: $47.99
As of 2022-12-09 04:38:50 UTC (more info)
Product prices and availability are accurate as of 2022-12-09 04:38:50 UTC and are subject to change. Any price and availability information displayed on http://www.amazon.com/ at the time of purchase will apply to the purchase of this product.
Availability: Not Available - stock arriving soon
Buy Now from Amazon
Product Information (more info)
CERTAIN CONTENT THAT APPEARS ON THIS SITE COMES FROM AMAZON SERVICES LLC. THIS CONTENT IS PROVIDED 'AS IS' AND IS SUBJECT TO CHANGE OR REMOVAL AT ANY TIME.

No End (1984) stands as the "most explicitly political" (Jonathan Rosenbaum, The Chicago Reader) film ever written and directed by filmmaker Krzysztof Kieslowski (The Double Life of Veronique). Seen as the predecessor to Three Colors: Blue (1993), No End also focuses on the story of a woman coping with the sudden death of her husband. But while Blue works as a cinematic utterance of a psychological state, No End exemplifies Kieslowski's career-long interest on the connections between individual psyche and the politics of collective institutions. In the film, a woman's loss exists in constant dialogue with Poland's labor turmoil of the 1980s and the formation of the independent trade union "Solidarity." Antek was one of the few lawyers willing to take on political cases in a period of enforced martial law. Upon his unexpected death, Antek's wife Ulla struggles to cope with her grief, but eventually takes on the task of finding another attorney to take over one of her husband's cases and defend a man jailed for leading a labor strike. After connecting a colleague from Antek's post with the prisoner's wife, a series of mysterious signals make Ulla believe that Antek is warning her about the man chosen to replace him. Featuring a haunting score by long-time collaborator Zbigniew Preisner (Three Colors Trilogy and riveting performances by its leading cast, Kieslowski creates in No End a moment of mourning for both Ulla and a nation disenchanted with its present and future possibilities.