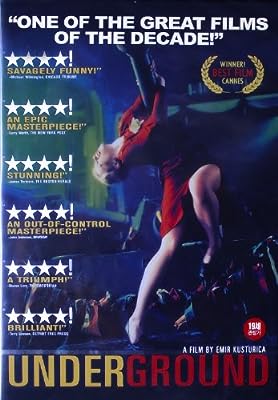 Price:
As of 2022-11-27 19:29:35 UTC (more info)
Product prices and availability are accurate as of 2022-11-27 19:29:35 UTC and are subject to change. Any price and availability information displayed on http://www.amazon.com/ at the time of purchase will apply to the purchase of this product.
Availability: Not Available - stock arriving soon
Buy Now from Amazon
Product Information (more info)
CERTAIN CONTENT THAT APPEARS ON THIS SITE COMES FROM AMAZON SERVICES LLC. THIS CONTENT IS PROVIDED 'AS IS' AND IS SUBJECT TO CHANGE OR REMOVAL AT ANY TIME.

Full, 162 minute version. This sprawling, exhausting, deeply moving Palme d'Or winner represents the pinnacle of Serbian director Emir Kusturica's considerable abilities, and what is easily one of the best cinematic achievements of the 1990s. It encapsulates 50 turbulent years of Yugoslavian history, from the outbreak of World War II in the 1940s to the destruction of this once-great nation in the 1990s. When we first meet Marko (Miki Manojlovic) and Blacky (Lazar Ristovski), it's hard to take these jokers seriously. All they want to do is party their lives away. But the Nazi shelling of Belgrade changes everything, and the resourceful duo comes up with an ingenious plan--one will stay aboveground while the other goes underground. The arrangement represents an ideal opportunity for all concerned: Blacky, his wife, and the rest of their friends and neighbors will be protected from the chaos going on above, while Marko and the lovely Natalija (Mira Sorvino look-alike Mirjana Jokovic) will sell the weapons they're making down below. Everyone will share in the profits. But Marko commits the ultimate act of betrayal--against Blacky and the rest of his subterranean comrades. This sort of deception can only lead to tragedy, and Kusturica doesn't spare us the details. In fact, it's his eye for detail that makes Underground such a memorable experience--the perfect note his cast strikes between the extremes of physical comedy, passionate romance, and mortal pain, the insidiously infectious brass-heavy score and the strikingly colorful images. Underground is basically a parable, and doesn't always adhere to the laws of physics. It isn't for the literal-minded, the impatient, or the partisan. It's loud, it's long, and it isn't for the easily offended. It may just also be one of the saddest movies ever made and stands as a fitting tribute to a country that exists only in the hearts and minds of its former residents. --Kathleen C. Fennessy