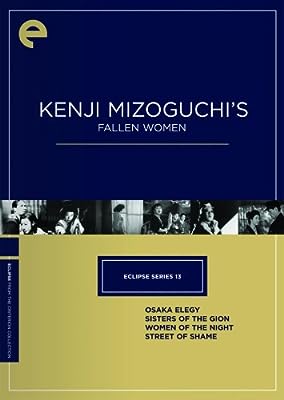 Price: $59.95
As of 2022-09-25 01:31:26 UTC (more info)
Product prices and availability are accurate as of 2022-09-25 01:31:26 UTC and are subject to change. Any price and availability information displayed on http://www.amazon.com/ at the time of purchase will apply to the purchase of this product.
Availability: Not Available - stock arriving soon
Buy Now from Amazon
Product Information (more info)
CERTAIN CONTENT THAT APPEARS ON THIS SITE COMES FROM AMAZON SERVICES LLC. THIS CONTENT IS PROVIDED 'AS IS' AND IS SUBJECT TO CHANGE OR REMOVAL AT ANY TIME.

Over the course of a three-decade, more than eighty film career, master cineaste Kenji Mizoguchi (Ugetsu, Sansho the Bailiff) would return again and again to one abiding theme: the plight of women in male-dominated Japanese society. In these four lacerating works of socially conscious melodrama two prewar (Osaka Elegy, Sisters of the Gion), two postwar (Women of the Night, Street of Shame) Mizoguchi introduces an array of compelling female protagonists, crushed or resilient, who are economically and spiritually deprived by their nation's customs and traditions. With Mizoguchi's visual daring and eloquence, these films are as cinematically thrilling as they are politically rousing.

This Mizoguchi quartet both anticipates and reinforces the director’s other comfort-women classics, like 1952's The Life of Oharu. If the Japanese master would tackle larger-scale works in the years between, these intimate dramas hold their own. Opening jazz refrain aside, Osaka Elegy strikes a melancholy chord in its depiction of an office worker casually degraded by the men in her life. At first, Ayako (Isuzu Yamada) resists the advances of her married employer, but when the capacity to support her deadbeat dad and ungrateful brother becomes unmanageable, she relents, despite her interest in a more appropriate (if equally judgmental) suitor. Also from 1936, the Kyoto-set Sisters of the Gion concerns a cynical geisha, Omocha (Yamada), who tries to provide a better life for her subservient sister, Umekichi (Yôko Umemura), even if she has to break several hearts--and even a few bones--in the process. What sounds like Tinsel Town-style melodrama plays out in a matter-of-fact, yet no less affecting manner in Mizoguchi's unsentimental hands.

In 1948's Women of the Night, the filmmaker returns to Osaka to focus on Fusako (Kinuyo Tanaka), a poverty-stricken widow who rebuilds her life after the war, then loses it all when her boss and sister betray her. Though Natsuko (Sanae Takasugi) attempts to make it up to Fusako, the situation only worsens once rape, syphilis, and pregnancy enter the picture (the liner notes indicate that Mizoguchi later dismissed this tough-minded movie as "barbarous"). His final film, 1956’s Street of Shame, centers on a Yoshiwara brothel that operates like any other retail establishment. The most painful strand concerns an aging courtesan facing an Oharu-like future. Overall, these women look like survivors rather than victims, but Mizoguchi leaves no doubt regarding his frustration with a social order that would create and punish such steely characters. --Kathleen C. Fennessy