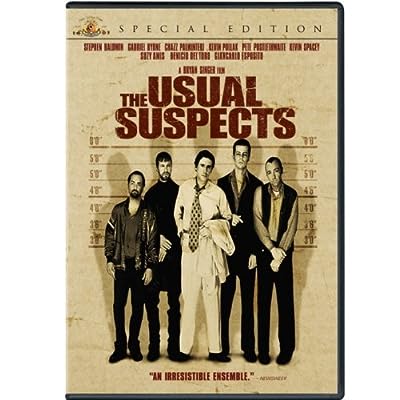 Price: $7.48
As of 2023-02-06 05:23:15 UTC (more info)
Product prices and availability are accurate as of 2023-02-06 05:23:15 UTC and are subject to change. Any price and availability information displayed on http://www.amazon.com/ at the time of purchase will apply to the purchase of this product.
Availability: Not Available - stock arriving soon
Buy Now from Amazon
Product Information (more info)
CERTAIN CONTENT THAT APPEARS ON THIS SITE COMES FROM AMAZON SERVICES LLC. THIS CONTENT IS PROVIDED 'AS IS' AND IS SUBJECT TO CHANGE OR REMOVAL AT ANY TIME.

Winner of two 1995 Academy AwardsÂ(r), including Best Original Screenplay, this masterful, atmospheric film noir enraptured audiences with its complex and riveting storyline, gritty, tour-de-force performances (including an OscarÂ(r)-winning* turn by Kevin Spacey) and a climax that is truly deserving of the word stunning. Also starring Stephen Baldwin, Gabriel Byrne, Chazz Palminteri, Kevin Pollak and Pete Postlethwaite, this 'thoroughly engrossing film (HBO) is so gripping and diabolically clever (The Wall Street Journal) that it becomes a maze you'll be happy to get lost in (Los Angeles Times)! Held in an L.A. interrogation room, Verbal Kint attempts to convince the feds that the mythic crime lord not only exists, but was also responsible for drawinghim and his four partners into a multi-million dollar heist that ended with an explosion in San Pedro Harborleaving few survivors. But as Kint lures his interrogators into the incredible story of this crime lord's almost supernatural prowess, so too will you be mesmerized by a lore that is completely captivating from beginning to end!

The Naked Kiss (The Criterion Collection...