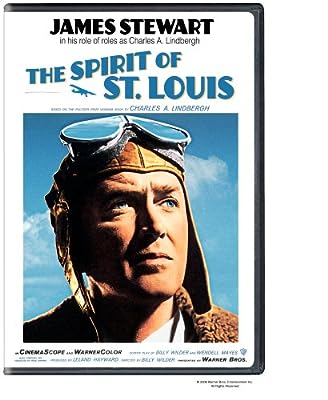 Price: $19.97
As of 2021-06-16 10:39:39 UTC (more info)
Product prices and availability are accurate as of 2021-06-16 10:39:39 UTC and are subject to change. Any price and availability information displayed on http://www.amazon.com/ at the time of purchase will apply to the purchase of this product.
Availability: Not Available - stock arriving soon
Buy Now from Amazon
Product Information (more info)
CERTAIN CONTENT THAT APPEARS ON THIS SITE COMES FROM AMAZON SERVICES LLC. THIS CONTENT IS PROVIDED 'AS IS' AND IS SUBJECT TO CHANGE OR REMOVAL AT ANY TIME.

Spirit of St. Louis, The (DVD)

Celebrate the historic May 20, 1927 flight of "The Spirit of St. Louis" with screen legend Jimmy Stewart ("It's a Wonderful Life," "The Philadelphia Story") as aerial legend Charles Lindbergh. Writer-director Billy Wilder ("Some Like It Hot," "Double Indemnity") brings a lavish, suspense-filled recounting of Lindbergh's historic trip from New York to Paris, the first non-stop solo flight across the Atlantic, based on the famous pilot's autobiography.

Two Hollywood giants came together for The Spirit of St. Louis: James Stewart and director Billy Wilder. Both were slightly miscast for the material, an account of Charles Lindbergh's galvanizing solo flight across the Atlantic in 1927. Stewart was at least 20 years too old to play the young pilot, and his enormous personal warmth was at odds with the rather frosty real-life demeanor of the Lone Eagle. Wilder was better known for his sardonic critiques of man's lesser instincts, which makes the choice of this flat-out study of heroism somewhat peculiar. The mismatch shows in the movie, which is arranged around Lindy's historic puddle jump but is also checkerboarded together by a series of awkward flashbacks showing his background. Once the flight begins, in a thrilling sequence of the plane's near-miss takeoff, the film settles into a generally engrossing study of man against the elements. In a great Wilder touch, Stewart spends part of the journey conversing with a stowaway house fly. The aerial photography is stunning, and it's impossible to resist the unalloyed joy of Stewart's realization that he's spotted the Irish coast after a very long night over the ocean. Not unlike the pilot himself, this movie is happiest and most secure when it's in the seat of the plane, unencumbered by anything but forward motion and a goal. --Robert Horton