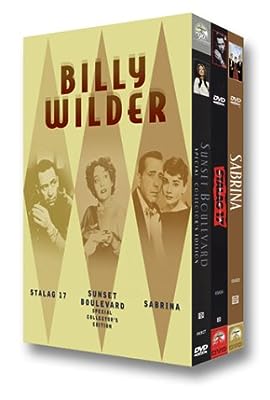 Price: $79.99
As of 2021-10-21 15:59:24 UTC (more info)
Product prices and availability are accurate as of 2021-10-21 15:59:24 UTC and are subject to change. Any price and availability information displayed on http://www.amazon.com/ at the time of purchase will apply to the purchase of this product.
Availability: Not Available - stock arriving soon
Buy Now from Amazon
Product Information (more info)
CERTAIN CONTENT THAT APPEARS ON THIS SITE COMES FROM AMAZON SERVICES LLC. THIS CONTENT IS PROVIDED 'AS IS' AND IS SUBJECT TO CHANGE OR REMOVAL AT ANY TIME.

This boxed set shows the many moods of director Billy Wilder, from luxurious cynicism to spiky romance. He's teamed up for all three pictures with William Holden, and the two are perfectly tuned to each other's sardonic intelligence. Actually, Holden was a last-minute replacement in Sunset Boulevard, when Montgomery Clift abruptly backed out of the project. Holden plays a hard-luck screenwriter who takes refuge in the home of a deluded silent-movie star (played by Gloria Swanson); we know this because his corpse is telling us the story. The 1950 film is one of the great decayed mansions of Hollywood cinema, a fully imagined look at the souring of the American Dream. And, of course, a poison-pen letter to the movie business--Wilder took pleasure in biting the hand that fed him.

Stalag 17 (1953) won the Best Actor Oscar® for Holden, although it's a less complex piece of work than Sunset Boulevard. It is, however, thoroughly entertaining, with a seamless blend of suspense (who in the POW camp is betraying secrets to the Germans?) and raucous comedy. Sixties-TV fans will quickly spot the similarity with the Bob Crane sitcom Hogan's Heroes. Otto Preminger, himself a director, creates a suave piece of villainy as the German camp commandant. In Sabrina (1954), Holden is a blond, fatuous younger brother to staid businessman Humphrey Bogart--but they both do supporting work to Audrey Hepburn. This is one of her great vehicles, and she inspires Wilder to show more of his romantic side. As the chauffeur's daughter who dreams of mingling with the beautiful people, Hepburn shines in the lush glow of moonlight and "Isn't it Romantic?" and the movie finds a zone of pure pleasure. --Robert Horton