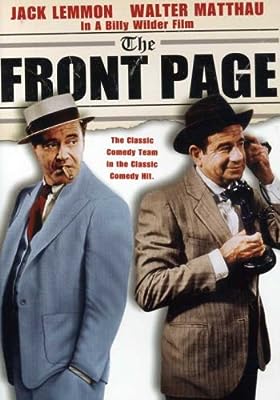 Price: $12.98
As of 2021-06-16 10:41:53 UTC (more info)
Product prices and availability are accurate as of 2021-06-16 10:41:53 UTC and are subject to change. Any price and availability information displayed on http://www.amazon.com/ at the time of purchase will apply to the purchase of this product.
Availability: Not Available - stock arriving soon
Buy Now from Amazon
Product Information (more info)
CERTAIN CONTENT THAT APPEARS ON THIS SITE COMES FROM AMAZON SERVICES LLC. THIS CONTENT IS PROVIDED 'AS IS' AND IS SUBJECT TO CHANGE OR REMOVAL AT ANY TIME.

Ruthless newspaper editor Walter Burns (Walter Matthau) and his crack ace reporter Hildy (Jack Lemmon) believe together they can cover any story. The only problem is their team is being broken up as Hildy has decided to get married and leave the newspaper business altogether. As Hildy grooms his replacement, his retirement is derailed when the story of the century breaks. As all of Chicago is in hot pursuit, Hildy's instincts tell him something is rotten. Carol Burnett and Susan Sarandon co-star in this hilarious nonstop comedy.