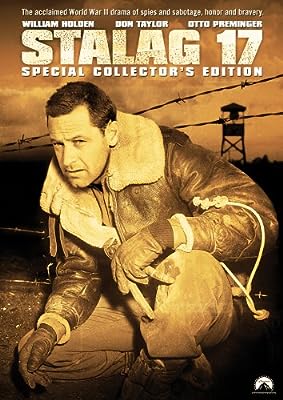 Price: $12.99
As of 2021-07-30 21:28:08 UTC (more info)
Product prices and availability are accurate as of 2021-07-30 21:28:08 UTC and are subject to change. Any price and availability information displayed on http://www.amazon.com/ at the time of purchase will apply to the purchase of this product.
Availability: Not Available - stock arriving soon
Buy Now from Amazon
Product Information (more info)
CERTAIN CONTENT THAT APPEARS ON THIS SITE COMES FROM AMAZON SERVICES LLC. THIS CONTENT IS PROVIDED 'AS IS' AND IS SUBJECT TO CHANGE OR REMOVAL AT ANY TIME.

Two worthy Academy Award® nominees from 1950's Sunset Boulevard – actor William Holden and director Billy Wilder – reteamed three years later for the gripping World War II drama, Stalag 17. The result was another Best Director nomination for Wilder (his fourth), and the elusive Best Actor Oscar® for Holden. Holden portrays the jaded, scheming Sergeant J.J. Sefton, a prisoner at the notorious German prison camp, who spends his days dreaming up rackets and trading with the Germans for special privileges. But when two prisoners are killed in an escape attempt, it becomes obvious that there is a spy among the prisoners. Is it Sefton? Famed producer/director Otto Preminger tackles a rare acting role as the camp's commandant; actor Robert Strauss won a Supporting Actor nomination for his role as "Animal." Here's Wilder's powerful, acclaimed film classic -- now packed with never-before-seen special features, including audio commentary and "behind-the-scenes" featurettes.