The Children Are Watching Us (The Criterion Collection) 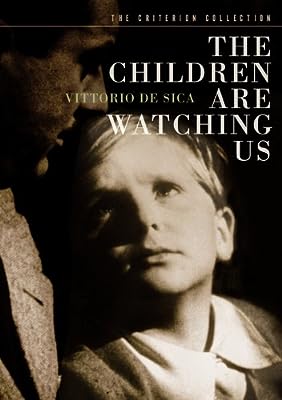 Price: $21.99
As of 2022-09-25 05:06:48 UTC (more info)
Product prices and availability are accurate as of 2022-09-25 05:06:48 UTC and are subject to change. Any price and availability information displayed on http://www.amazon.com/ at the time of purchase will apply to the purchase of this product.
Availability: Not Available - stock arriving soon
Buy Now from Amazon
Product Information (more info)
CERTAIN CONTENT THAT APPEARS ON THIS SITE COMES FROM AMAZON SERVICES LLC. THIS CONTENT IS PROVIDED 'AS IS' AND IS SUBJECT TO CHANGE OR REMOVAL AT ANY TIME.

The film follows the anguish of the four-year-old, Prico, after his mother, Nina, leaves his father, Andrea, for her lover Roberto. Prico is sent to his aunt and then to his grandmother. Nina returns when Prico is sick and vows to give up Roberto, even though he persists in seeing her. The family situation gradually improves until they take a holiday on the Italian Riviera.

Vittoria De Sica's mastery of neorealism was already well apparent in 1944's The Children Are Watching Us, an excellent, emotionally devastating drama that marked De Sica's first collaboration with renowned screenwriter and longtime partner Cesare Zavattini. While not as well known as De Sica's later masterpieces The Bicycle Thief (1948) and Umberto D. (1952), the film shares many of De Sica's stylistic trademarks, beginning with his exquisite use of real Italian locations in telling the story of Pricò, an observant and inquisitive 4-year-old boy who bears silent witness to his mother's infidelity and the subsequent collapse of his parents' marriage. Like Carol Reed's thematically similar classic The Fallen Idol, De Sica's film is seen almost exclusively through the eyes and perception of this innocent young boy, and the frank treatment of adultery and its effect on Pricò was considered quite shocking for Italian audiences who were emphatically concerned with the sanctity of childhood. What seems dramatically tame by modern standards still retains much of its power, notably due to the remarkable performance of Luciano De Ambrosis, who was barely five years old when the film was shot in the summer of 1942, just before the violence of World War II would erupt all over Italy.

In combining empathy for his characters with the graceful sentimentality that would be refined in his later classics, De Sica refrains from judging the weaknesses of Pricò's parents, both of whom love the boy equally but are ill-equipped to avoid the disintegration of the relationship. This places Pricò in the middle of a gut-wrenching dilemma, and the boy responds with understandable grief and confusion. In running away, he shifts the story toward a heartbreaking conclusion, lending substance to the film's alternate title (The Little Martyr) with a final image that's simply unforgettable. Criterion's exquisite DVD release presents this potent drama in a new, fully restored high-definition digital transfer, and includes illuminating video interviews with De Ambrosis (well into his sixties, with vivid memories of working with De Sica) and De Sica film scholar Callisto Cosulich. The 24-page booklet features mini-essays by film scholar Peter Brunette (writing about The Children Are Watching Us) and film critic Stuart Klawans on the unique collaboration of De Sica and Zavattini. Considering that The Children Are Watching Us was largely unavailable in any previous film or video format, Criterion's DVD release is cause for celebration. --Jeff Shannon