Indiscretion of an American Wife / Terminal Station (The Criterion Collection) 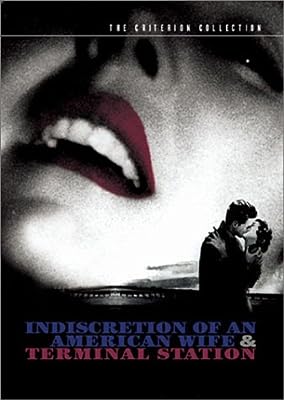 Price: $29.45
As of 2021-09-26 07:00:43 UTC (more info)
Product prices and availability are accurate as of 2021-09-26 07:00:43 UTC and are subject to change. Any price and availability information displayed on http://www.amazon.com/ at the time of purchase will apply to the purchase of this product.
Availability: Not Available - stock arriving soon
Buy Now from Amazon
Product Information (more info)
CERTAIN CONTENT THAT APPEARS ON THIS SITE COMES FROM AMAZON SERVICES LLC. THIS CONTENT IS PROVIDED 'AS IS' AND IS SUBJECT TO CHANGE OR REMOVAL AT ANY TIME.

A married American woman has gotten involved with another man while visiting relatives in Rome. She decides that the time has come to break off the relationship, and she makes plans to return home to her husband. But she soon realizes that she is not at all sure about what she wants to do, and she continues to agonize over her decision.

Just as David O. Selznick and Alfred Hitchcock had clashed while filming Rebecca, the meddlesome producer left his Hollywood imprint on the troubled production of Vittorio De Sica's Terminal Station. Selznick's career was fading fast, and while self-exiled in Europe he seized on the notion of melding De Sica's masterful neorealism with a daring but otherwise conventional studio romance, casting big stars in a turgid melodrama about a Philadelphia housewife traveling in Rome (Jennifer Jones, Selznick's wife) who must choose between marital fidelity or illicit passion with a lovestruck Italian (Montgomery Clift) as she prepares to depart from Rome's coldly modern Stazione Termini. After De Sica's 89-minute Terminal Station tested poorly with audiences, Selznick cut the film to 64 minutes (excising most of De Sica's neorealistic atmosphere), added an 8-minute prologue of Patti Page singing two moody ballads to pad the truncated running time, and still failed to attract audiences with his gauchely retitled Indiscretion of an American Wife.

Both versions are included on Criterion's magnificent DVD, allowing latter-day viewers a revealing comparison/contrast between Selznick's commercial taste (glossy and sentimental) and De Sica's artistic vision. Indiscretion turns Jones's overwrought character into a dimensionless focus of guilt and shame, lacking the moral depth of Terminal Station, in which her dilemma is more compellingly explored. Inevitably, only De Sica's version achieves Selznick's original goal: It's a remarkable hybrid of neorealism (with its authentic setting populated by people of all classes, subtly affecting the story) and Selznick's heavy-handed moralizing (with a partial dialogue polish by Truman Capote). Commentary by film scholar Leonard Leff and liner notes by critic Dave Kehr further illuminate this clash of formidable talents, illustrating how both films, gloriously restored, serve the divergent purposes of their creators. --Jeff Shannon