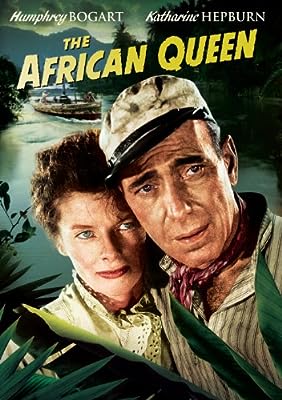 Price: $19.94
As of 2021-07-31 15:35:43 UTC (more info)
Product prices and availability are accurate as of 2021-07-31 15:35:43 UTC and are subject to change. Any price and availability information displayed on http://www.amazon.com/ at the time of purchase will apply to the purchase of this product.
Availability: Not Available - stock arriving soon
Buy Now from Amazon
Product Information (more info)
CERTAIN CONTENT THAT APPEARS ON THIS SITE COMES FROM AMAZON SERVICES LLC. THIS CONTENT IS PROVIDED 'AS IS' AND IS SUBJECT TO CHANGE OR REMOVAL AT ANY TIME.

Starring Academy Award® winners* HUMPHREY BOGART and KATHARINE HEPBURN, The African Queen tells the timeless tale of two mismatched strangers jo ining forces in a common cause - and finding love along the way. The sto ry chronicles the burgeoning romance between Bog ie’s river rat Charlie Allnut and Hepburn’s missionary Rose Sayer, as they reluctantly join for ces to torpedo a German gunboat in wa r-torn East Africa. Directed by Ac ademy Award® winner** JOHN HUSTON, and filmed on location in the Belgian Congo, The African Queen is arguably one of the finest films ever made - with one of the most legendary star pairings ever to appear on the scr een! *Hum phrey Bogart: 1951, Best Actor, The African Queen; Kathar ine Hepburn: 1932/33, Best Actress, Morning Glory; 1967, Best Actress, G ues s Who’s Coming to Dinner ; 1968, Best Actress, The Lion in Winter; 1 981, Best Actress in a Leading Role, On Golden Pond **1948, Best Direct ing and Best Writing (Screenplay), The Treasure of the Sierra Madre ‘AC ADEMY AWARDS®’ is the registered trademark and servic e mark of the Acad emy of Motion Picture Arts and Sciences.