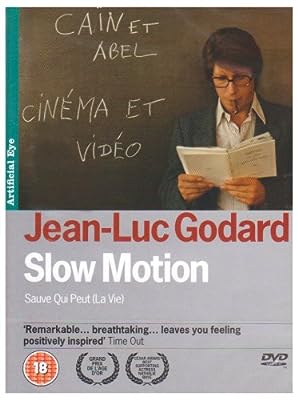 Price: $14.66
As of 2021-09-24 17:26:18 UTC (more info)
Product prices and availability are accurate as of 2021-09-24 17:26:18 UTC and are subject to change. Any price and availability information displayed on http://www.amazon.com/ at the time of purchase will apply to the purchase of this product.
Availability: Not Available - stock arriving soon
Buy Now from Amazon
Product Information (more info)
CERTAIN CONTENT THAT APPEARS ON THIS SITE COMES FROM AMAZON SERVICES LLC. THIS CONTENT IS PROVIDED 'AS IS' AND IS SUBJECT TO CHANGE OR REMOVAL AT ANY TIME.

United Kingdom released, PAL/Region 2 DVD: it WILL NOT play on standard US DVD player. You need multi-region PAL/NTSC DVD player to view it in USA/Canada: LANGUAGES: French ( Dolby Digital 2.0 ), English ( Subtitles ), ANAMORPHIC WIDESCREEN (1.85:1), SPECIAL FEATURES: Biographies, Documentary, Filmographies, Interactive Menu, SYNOPSIS: Sauve Qui Peut (la Vie), a pessimistic but visually stunning film, marks Jean-Luc Godard's return to cinema after having spent the 70s working in video. The film presents a few days in the lives of three people: Paul Godard (Jacques Dutronc ), a television producer; Denise Rimbaud (Nathalie Baye), his co-worker and ex-girlfriend; and Isabelle Riviera (Isabelle Huppert), a prostitute whom Paul has used. Denise wants to break up with Paul and move to the country. Isabelle wants to work for herself instead of her pimp. Paul just wants to survive. Their stories intersect when Paul brings Denise to the country cottage he is trying to rent and Isabelle comes to see it without knowing that the landlord has been her client. The film is broken into segments entitled "The Imaginary," "Commerce," "Life," and "Music." Each of the first three sections focuses on one character and the last section brings all three characters together. This complex film is often closer to an essay than a story; it uses slow motion and experimental techniques to explore questions of love, work, and the nature of cinema. Sauve Qui Peut (la Vie) was Godard's first film with his frequent collaborator Anne-Marie Miéville, who edited and co-wrote the film. SCREENED/AWARDED AT: Cannes Film Festival, Ceasar Awards, ...Slow Motion ( Sauve qui peut (la vie) ) ( Every Man for Himself )