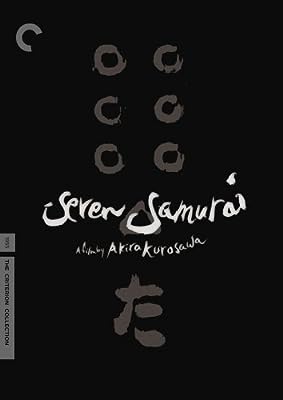 Price: $30.04
As of 2021-07-28 19:35:11 UTC (more info)
Product prices and availability are accurate as of 2021-07-28 19:35:11 UTC and are subject to change. Any price and availability information displayed on http://www.amazon.com/ at the time of purchase will apply to the purchase of this product.
Availability: Not Available - stock arriving soon
Buy Now from Amazon
Product Information (more info)
CERTAIN CONTENT THAT APPEARS ON THIS SITE COMES FROM AMAZON SERVICES LLC. THIS CONTENT IS PROVIDED 'AS IS' AND IS SUBJECT TO CHANGE OR REMOVAL AT ANY TIME.

Hailed as the greatest film in the history of Japanese cinema, Seven Samurai is director Akira Kurosawa's undisputed masterpiece. Arguably the greatest of all jidai-gecki (or historical swordplay films), Kurosawa's classic 1954 action drama has never been surpassed in terms of sheer power of emotion, kinetic energy, and dynamic character development. The story is set during the civil unrest of 16th-century Japan, as the cowering residents of a small farming village are seeking protection against seasonal attacks by a band of marauding bandits. Offering mere handfuls of rice as payment, they hire seven unemployed "ronin" (masterless samurai), including a boastful swordsman (Toshiro Mifune) who is actually a peasant farmer's son, desperately seeking glory, acceptance, and revenge against those who destroyed his family. Led by the calmly strategic Kambei (Takashi Shimura, star of Kurosawa's previous classic, Ikiru), the samurai form mutual bonds of honor and respect, but remain distant from the villagers, knowing that their assignment may prove to be fatal.

Kurosawa masterfully composed his shots to emphasize these group dynamics, and Seven Samurai is a textbook study of the director's signature techniques, including extensive use of telephoto lenses to compress action, delineate character relationships, and intensify motion. While the climactic battle against raiding thieves remains one of the most breathtaking sequences ever filmed, Seven Samurai is most triumphant as a peerless example of character development, requiring all of its 2-hour, 37-minute running time to illuminate every essential detail of villagers and samurai alike, including an abundance of humor as Kambei's defense plan unfolds. In terms of its overall impact, Seven Samurai spawned dozens of copycat films (notably the American Western remake The Magnificent Seven) and cannot be adequately summarized by even the most comprehensive synopsis; it must be seen to be fully appreciated, and the Criterion Collection's 2006 DVD reissue is an essential addition to any definitive home-video library. --Jeff Shannon

On the DVDs
According to the accompanying booklet, "the picture has been slightly window-boxed (in correct original 1.33:1 aspect ratio) to ensure that the maximum image is visible on all monitors." The two-disc format was necessary "to maintain optimal image quality throughout the compression process," with dual-layered DVD-9's encoded "at the highest possible bit rate for the quantity of material included." The picture and sound quality are simply amazing compared to Criterion's one-disc release from 1998. The all-new, fully restored high-definition digital transfer takes full advantage of HD's clarity and crispness, resulting in picture detail far surpassing the previous DVD. This also applies to the soundtrack, presented in optional Dolby surround in addition to the remastered original mono track. The new transfer "was mastered in 2k resolution from a duplicate negative created with wetgate processing from the original fine-grain master positive" (the film's original negative is no longer available), and "several different digital hardware and software solutions were utilized for flicker, instability, dirt, scratch, and grain management."

The 50-minute "making of" documentary, from Japan's 2002 Toho Masterworks TV series Akira Kurosawa: It Is Wonderful to Create emphasizes Kurosawa's colla boration with co-screenwriters Shinobu Hashimoto and Hideo Oguni, including production footage, crewmember interviews, and a reverent visit to the rural inn where Seven Samurai was written over a six-week period of intense seclusion. The two-hour "My Life in Cinema" interview with Kurosawa was recorded in 1993, with fellow filmmaker Nagisa Oshima serving as a gentle admirer, colleague, and well-informed historian of Kurosawa's career. "Seven Samurai: Origins and Influences" is a richly informative documentary that places Kurosawa's classic in both historical and cinematic context, examining its place in the jidai-gecki (swordplay) genre, its accurate depiction of samurai codes and traditions, and its stature as the prototype for many films that followed. The lavishly illustra ted 58-page booklet includes eight brief essays on various aspects of Seven Samurai, each written by noted film scholars or film directors (including Arthur Penn and Sidney Lumet). Also included is a reminiscence by the great actor T oshiro Mifune, excerpted from a conversation recorded in 1993. Taken as a whole, the remastered three-disc Seven Samurai ranks as one of the finest DVD sets ever released. --Jeff Shannon