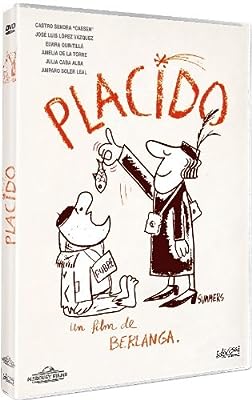 Price: $32.91
As of 2023-02-08 04:03:20 UTC (more info)
Product prices and availability are accurate as of 2023-02-08 04:03:20 UTC and are subject to change. Any price and availability information displayed on http://www.amazon.com/ at the time of purchase will apply to the purchase of this product.
Availability: Not Available - stock arriving soon
Buy Now from Amazon
Product Information (more info)
CERTAIN CONTENT THAT APPEARS ON THIS SITE COMES FROM AMAZON SERVICES LLC. THIS CONTENT IS PROVIDED 'AS IS' AND IS SUBJECT TO CHANGE OR REMOVAL AT ANY TIME.

Spain released, PAL/Region 0 DVD: it WILL NOT play on standard US DVD player. You need multi-region PAL/NTSC DVD player to view it in USA/Canada: LANGUAGES: Spanish ( Dolby Digital 2.0 ), Spanish ( Dolby Digital 5.1 ), Spanish ( Mono ), English ( Subtitles ), SPECIAL FEATURES: Black & White, Filmographies, Interactive Menu, Scene Access, SYNOPSIS: This is an effective satire directed by Luis Berlanga that pans charity from the head - the cold, calculated or unthinking kind - as versus charity from the heart. The focus is on Placido (Casto Sendra-Cassen), a truckdriver who has little money and so making regular payments on his truck can be difficult, so much so that he gets behind and is in danger of having his vehicle repossessed. Meanwhile, he gets involved in a local, annual charity drive that opens up his eyes to the problems and foibles of other impoverished people. After those experiences, Placido has a different attitude toward his monthly payments. ...Placido (1961) ( Plácido )