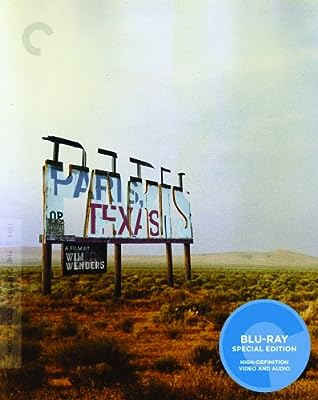 Price: $25.89
As of 2021-05-18 04:23:38 UTC (more info)
Product prices and availability are accurate as of 2021-05-18 04:23:38 UTC and are subject to change. Any price and availability information displayed on http://www.amazon.com/ at the time of purchase will apply to the purchase of this product.
Availability: Not Available - stock arriving soon
Buy Now from Amazon
Product Information (more info)
CERTAIN CONTENT THAT APPEARS ON THIS SITE COMES FROM AMAZON SERVICES LLC. THIS CONTENT IS PROVIDED 'AS IS' AND IS SUBJECT TO CHANGE OR REMOVAL AT ANY TIME.

A lost man surfaces, reunites with his brother and son, and finds his wife working in a peep show. Directed by Wim Wenders. Music by Ry Cooder.