Kings of the Road (In the Course of Time) [British import, PAL Region 2 format] 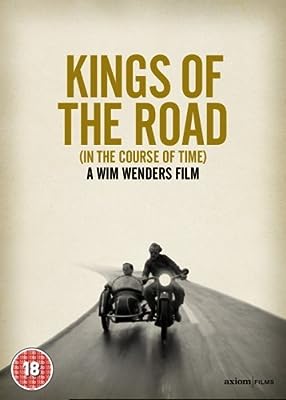 Price: $42.45
As of 2021-05-17 02:24:01 UTC (more info)
Product prices and availability are accurate as of 2021-05-17 02:24:01 UTC and are subject to change. Any price and availability information displayed on http://www.amazon.com/ at the time of purchase will apply to the purchase of this product.
Availability: Not Available - stock arriving soon
Buy Now from Amazon
Product Information (more info)
CERTAIN CONTENT THAT APPEARS ON THIS SITE COMES FROM AMAZON SERVICES LLC. THIS CONTENT IS PROVIDED 'AS IS' AND IS SUBJECT TO CHANGE OR REMOVAL AT ANY TIME.

The final part of Wim Wenders' loose trilogy of road movies (following on from Alice in the Cities and Wrong Move), KINGS OF THE ROAD (aka IN THE COURSE OF TIME) has been hailed as one of the best films of the 1970s and remains Wenders' most remarkable portrait of his own country. After driving his car at high speed off a road and into a river, losing all his worldly possessions, Robert Lander (Hanns Zischler) hitches a ride with Bruno Winter (Rüdiger Vogler), who travels across Germany's hinterland repairing projectors in run-down cinemas. Along the way, the two men meet people whose lives are as at odds with the modern world as their own. In attempting to reconcile their past, the two men find themselves increasingly at odds with each other. KINGS OF THE ROAD (aka IN THE COURSE OF TIME) is a meditation on the passing of the age of great cinema, an acute study of life in post-war Germany and to this day remains one of Wim Wenders' most accomplished films. Product Description Two-disc set. DVD bonus features include a 'Conversations on Kings of the Road' featurette and deleted scenes.