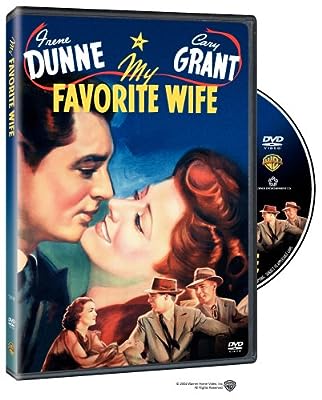 Price: $12.75
As of 2021-07-28 11:40:05 UTC (more info)
Product prices and availability are accurate as of 2021-07-28 11:40:05 UTC and are subject to change. Any price and availability information displayed on http://www.amazon.com/ at the time of purchase will apply to the purchase of this product.
Availability: Not Available - stock arriving soon
Buy Now from Amazon
Product Information (more info)
CERTAIN CONTENT THAT APPEARS ON THIS SITE COMES FROM AMAZON SERVICES LLC. THIS CONTENT IS PROVIDED 'AS IS' AND IS SUBJECT TO CHANGE OR REMOVAL AT ANY TIME.

Cary Grant and Irene Dunne star in this classic romantic comedy about a man with one spouse too many--and the resulting legal and romantic dilemma--My Favorite Wife. Seven years ago, Nick Arden's (Grant) wife, Ellen (Dunne), left on a scientific expedition with Stephen Burkett (Randolph Scott) never to be seen again--until today! The problem is that after spending years searching for Ellen, Nick has just married Bianca (Gail Patrick). When, on the first night of his honeymoon, Nick sees Ellen, he realizes he still truly loves her. But Bianca stands by her claim as Nick's wife, and Nick wants to know exactly what Ellen was doing during the seven years shipwrecked on a tropical island with the handsome Stephen.

That delightful couple from The Awful Truth, Cary Grant and Irene Dunne, revisit the world of marital confusion. Presuming his wife to be dead, Grant remarries--on the same day that his bedraggled spouse (that's Dunne) returns. Seems she's been stranded on a desert island for seven years (with strapping hunk Randolph Scott, too). The moment Cary spots his resurrected wife, as an elevator door slides shut, is one of the many funny gags in this comedy, and the final sequence is memorably wacky. Awful Truth director Leo McCarey prepared the film, but it was directed by author Garson Kanin. The two stars are so adept at farce, and so effortless in conveying their characters' mutual affection, that the movie triumphs over the whopper of a plot device. It was supposed to be remade as the ill-fated Marilyn Monroe film Something's Got to Give, and ended up Move Over, Darling with Doris Day. --Robert Horton

Man of a Thousand Faces