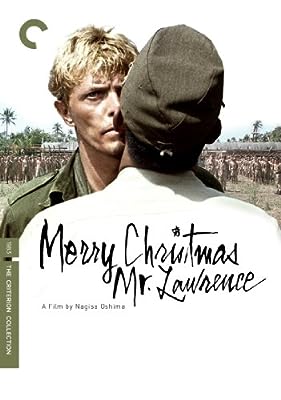 Price: $22.19
As of 2021-05-17 02:21:38 UTC (more info)
Product prices and availability are accurate as of 2021-05-17 02:21:38 UTC and are subject to change. Any price and availability information displayed on http://www.amazon.com/ at the time of purchase will apply to the purchase of this product.
Availability: Not Available - stock arriving soon
Buy Now from Amazon
Product Information (more info)
CERTAIN CONTENT THAT APPEARS ON THIS SITE COMES FROM AMAZON SERVICES LLC. THIS CONTENT IS PROVIDED 'AS IS' AND IS SUBJECT TO CHANGE OR REMOVAL AT ANY TIME.

In this captivating, exhilaratingly skewed World War II drama from Nagisa Oshima (In the Realm of the Senses, Empire of Passion), David Bowie (The Man Who Fell to Earth, Basquiat) regally embodies the character Celliers, a high-ranking British officer interned by the Japanese as a POW. Music star Ryuichi Sakamoto (who also composed this film’s hypnotic score) plays the camp commander, who becomes obsessed with the mysterious blond major, while Tom Conti (The Duellists; Reuben, Reuben) is British lieutenant colonel Mr. Lawrence, who tries to bridge the emotional and language divides between his captors and fellow prisoners. Also featuring actor-director Takeshi Kitano (Sonatine, Fireworks) in his first dramatic role, MERRY CHRISTMAS MR. LAWRENCE is a multilayered, brutal, at times erotic tale of culture clash that was one of Oshima’s greatest successes.

Nagisa Ôshima turned to Sir Laurens van der Post's semiautobiographical The Seed and the Sower for this fascinating prisoner-of-war saga. It's 1942 in Java, and the captors favor Colonel Lawrence (Tom Conti) for his honorable nature and facility with languages. New arrival Jack Celliers (David Bowie), on the other hand, has no intention of playing by the rules. Captain Yonoi (Oscar-winning composer Ryûichi Sakamoto, The Last Emperor) finds himself drawn to the blond major, while the brutal Sergeant Hara (filmmaker Takeshi Kitano in his dramatic debut) treats him like any other captive (if anything, Hara prefers him to Jack Thompson's combative commander). When Lawrence and Celliers disturb Yonoi's sense of order, he decides to punish them both--guilty or not--but Celliers receives the brunt of his anger, frustration, and thwarted desire (a point on which Ôshima remains ambiguous).

As in later works, like Gohatto, the director combines grit (seppuku, burial in sand), glamour (pop stars), and lyricism (the lilacs of Jack's childhood). If the regal Ryûichi inhabits his role with discomfort, Kitano, then best known as a comedian, fits his like a glove. And though Sakamoto's synth-based score sounds like a product of the 1980s, it adds to the mood of the piece.

This two-disc sets offers an essay from critic Chuck Stevens, interviews with Sakamoto and screenwriter Paul Mayersberg (The Man Who Fell to Earth), a profile of van der Post, and two featurettes, including The Ôshima Gang, in which Bowie describes Nagisa's work as "an expression rather than an impression of an idea." In its volatile mix of repression and respect, Merry Christmas plays like a psycho-sexual response to The Bridge on the River Kwai. As producer Jeremy Thomas notes, Ôshima liked to work quickly, and his first English-language feature isn't perfect, but it's certainly powerful. --Kathleen C. Fennessy

My Own Private Idaho (The Criterion Coll...