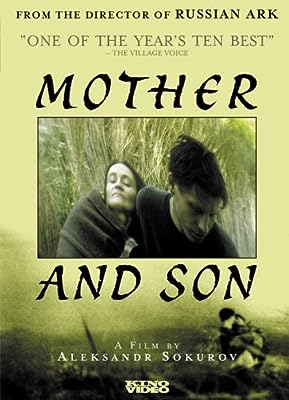 Price: $24.98
As of 2021-09-26 21:47:04 UTC (more info)
Product prices and availability are accurate as of 2021-09-26 21:47:04 UTC and are subject to change. Any price and availability information displayed on http://www.amazon.com/ at the time of purchase will apply to the purchase of this product.
Availability: Not Available - stock arriving soon
Buy Now from Amazon
Product Information (more info)
CERTAIN CONTENT THAT APPEARS ON THIS SITE COMES FROM AMAZON SERVICES LLC. THIS CONTENT IS PROVIDED 'AS IS' AND IS SUBJECT TO CHANGE OR REMOVAL AT ANY TIME.

A miracle of sound, light and characterization, Mother and Son achieves a pinnacle of film lyricism rarely, if ever, achieved before. Using stained glass, mirror effects and special lenses, director Aleksandr Sokurov (Russian Ark) and cameraman Aleksei Fyodorov have created "one of the most painterly features of all times" (Boston Phoenix). Both revolutionary in form and deeply reverent in theme, this intimate elegy is a truly unique film experience of universal relevance and hypnotic vision. Within a small cabin cloistered in a netherworld as idyllic as a dream, an ailing mother (Gudrun Geyer) and her grown son (Aleksei Ananishnov) play out a muted drama "so elemental, so primal and rudimentary, it's part of our genetic code" (Boston Herald). "I'm a head person, otherwise my heart would break," confesses the son as his mother's life ebbs away. But as the dutiful son comforts his dying mother in her final hours, and the shadow of mortality consumes her, heartbreak is inevitable. "Visuals that make Terrence Malick's Days of Heaven look like a home movie" (Time Out NY) herald both anguished solitude and the arbitrary grace of survival.