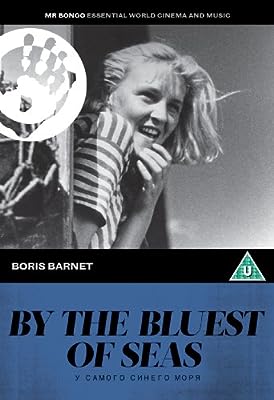 Price: $8.56
Availability: Not Available - stock arriving soon
Buy Now from Amazon
Product Information (more info)
CERTAIN CONTENT THAT APPEARS ON THIS SITE COMES FROM AMAZON SERVICES LLC. THIS CONTENT IS PROVIDED 'AS IS' AND IS SUBJECT TO CHANGE OR REMOVAL AT ANY TIME.

A storm on the Caspian Sea lands two friends, sailor Yusuf (Lev Sverdlin) and mechanic Alyosha (Nikolai Kruychkov, Okraina), on the shores of Soviet Azerbaijan where they arrive at the Lights of Communism kolkhoz ( collective farm ). They are able to find work at the farm as most of the other workers are fighting a conflict on the Pacific Ocean. One of the administrators of the kolkhoz is the beautiful Masha ( Yelena Kuzmina, Outskirts) who they both fall in love with. Their rivalry for her affections affects their work and threatens the community. By the Bluest Of Seas is one of the most lyrical and uplifting films of the Soviet era, eschewing propaganda in favour of a comedy about love and friendship.

Man with the Movie Camera