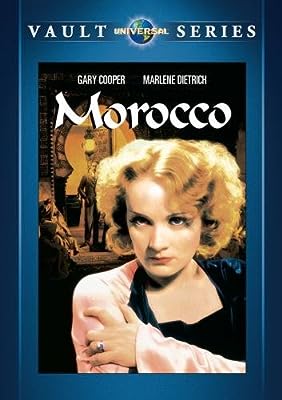 Price: $14.98
As of 2022-08-17 00:00:18 UTC (more info)
Product prices and availability are accurate as of 2022-08-17 00:00:18 UTC and are subject to change. Any price and availability information displayed on http://www.amazon.com/ at the time of purchase will apply to the purchase of this product.
Availability: Not Available - stock arriving soon
Buy Now from Amazon
Product Information (more info)
CERTAIN CONTENT THAT APPEARS ON THIS SITE COMES FROM AMAZON SERVICES LLC. THIS CONTENT IS PROVIDED 'AS IS' AND IS SUBJECT TO CHANGE OR REMOVAL AT ANY TIME.

Hollywood icon Marlene Dietrich makes her American film debut opposite Gary Cooper in Morocco. Jaded cabaret singer Mademoiselle Amy Jolly (Dietrich) falls for Tom Brown (Cooper), a devil-may-care private in the French Foreign Legion. After Tom overhears the wealthy man-of-the-world Monsieur La Bessier (Adolphe Enjoy) propose to Amy, he accepts a dangerous assignment, convinced that he cannot can give the beautiful chanteuse the life she wants. All proves fair in love and war, however, and Amy must decide which man she truly loves. Beautifully directed by Josef von Sternberg, this cinema classic was nominated for 4 Academy Awards including Best Actress and Best Director.