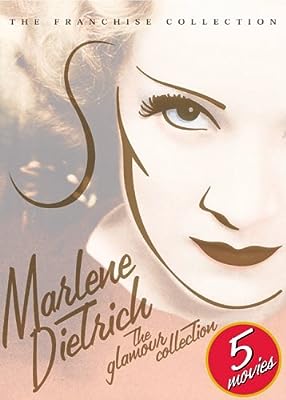 Price: $18.43
As of 2023-02-04 11:52:09 UTC (more info)
Product prices and availability are accurate as of 2023-02-04 11:52:09 UTC and are subject to change. Any price and availability information displayed on http://www.amazon.com/ at the time of purchase will apply to the purchase of this product.
Availability: Not Available - stock arriving soon
Buy Now from Amazon
Product Information (more info)
CERTAIN CONTENT THAT APPEARS ON THIS SITE COMES FROM AMAZON SERVICES LLC. THIS CONTENT IS PROVIDED 'AS IS' AND IS SUBJECT TO CHANGE OR REMOVAL AT ANY TIME.

Undeniably one of the most beautiful and dazzling actresses to ever grace the silver screen, Marlene Dietrich was renowned for her sultry voice and her alluring "bedroom eyes." This unprecedented 5-movie collection pays homage to the legendary Oscar-nominated leading lady whose extraordinary talents revolutionized cinema and inspired passion in audiences around the globe. See Marlene in her American movie debut as a glamorous cabaret singer in Morocco; experience the heart-wrenching anguish of a woman torn between two men, her successful career on stage and her child in Blonde Venus; join in the mystery and mayhem of Spain's Carnevale in The Devil Is a Woman; hit the road to jewels and jeopardy in The Flame of New Orleans; and be seduced by a lusty gypsy on a secret mission during World War II in Golden Earrings. It's a stunning tribute to a screen siren who remains one of the most fascinating women of all time.

Marlene Dietrich was one of the cinema's glorious creatures, an elegant arrangement of bone structure and silver light, blessed with a sly sense of humor. Marlene Dietrich: The Glamour Collection assembles five titles featuring la Dietrich at her best, with a special emphasis on one of the great Hollywood director-star collaborations.

Dietrich and director Josef von Sternberg met in Germany when he plucked her from obscurity for the starring role of The Blue Angel, after which she came to America and instant stardom. A string of films with Sternberg created her image as an exotic source of fascination, both ethereal and sexually knowing. Three of those outings are included in this package. Morocco, their first Hollywood movie together, is a delirious look at a cabaret singer taken with a Foreign Legion soldier (the young Gary Cooper). Dressed in masculine clothes for her act, Dietrich already displays a sexual confidence that fairly burns off the screen. Blonde Venus has a soap opera-ish plot about a woman's fall and rise, but Dietrich's commitment to the part is complete; plus, there's an outrageous faux-African number that begins with Dietrich dressed in a gorilla costume. Cary Grant looks on in astonishment.

The Devil Is a Woman is an unmitigated Sternberg-Dietrich masterpiece, and their final movie together. Here Marlene is a Spanish vixen making life exciting and miserable for Lionel Atwill (a lookalike stand-in for Josef von Sternberg himself). The film is an eye-popping light-painting draped with feathers, mesh, and confetti, all of which are in service to a fundamentally serious inquiry into the knotty business of men and women.

Putting three of the Paramount Dietrich-Sternberg films in this collection and leaving out the other three is either carelessness or marketing strategy. In any case, the other two movies in this package are not at the same level, but certainly good fun. The Flame of New Orleans, director Rene Clair's first Hollywood picture, is a gorgeously photographed comedy with a delightful role for its star. Dietrich is stuck choosing between aristocrat Roland Young and rough sailor Bruce Cabot. The look on her face as she listens to helpful advice about wedding-night conjugal realities from a matron is a riot of erotic mischief. Golden Earrings is a crazy story about Ray Milland getting stuck behind German lines in the early days of WWII, and being taken in by gypsy girl Dietrich. Even here, nearly 20 years after her first stardom, she's still Dietrich. The hair may be dyed black, but the cheekbones are unmistakable. --Robert Horton