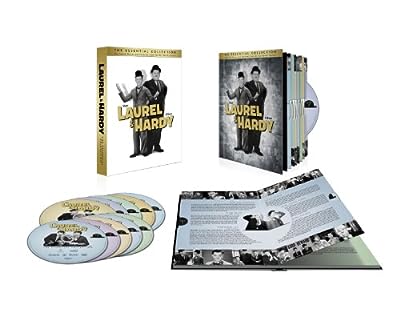 Price: $99.98
As of 2023-02-06 04:54:49 UTC (more info)
Product prices and availability are accurate as of 2023-02-06 04:54:49 UTC and are subject to change. Any price and availability information displayed on http://www.amazon.com/ at the time of purchase will apply to the purchase of this product.
Availability: Not Available - stock arriving soon
Buy Now from Amazon
Product Information (more info)
CERTAIN CONTENT THAT APPEARS ON THIS SITE COMES FROM AMAZON SERVICES LLC. THIS CONTENT IS PROVIDED 'AS IS' AND IS SUBJECT TO CHANGE OR REMOVAL AT ANY TIME.

Laurel & Hardy were one of the most critically acclaimed comedy teams of early American cinema. Their films produced by Hal Roach during the 20s and 30s defined their legacy, and are now available for the first time in a one comprehensive 10-DISC COLLECTION! This set contains films from Hal Roach library such as The Music Box (Academy Award® Best Short Subject), Brats, Hog Wild, Chickens Come Home, Sons of the Desert and Way out West to name a few. A special bonus disc features entertaining never before seen interviews from Dick Van Dyke, Jerry Lewis and Tim Conway, insightful commentaries, additional films and original trailers.

"Eternal pals and eternal antagonists, Stan Laurel and Oliver Hardy are the great partnership of movie slapstick. They finally get their DVD due with Laurel & Hardy: The Essential Collection, a 10-disc orgy of pratfalls, slow burns, and slap fights--in short, a collection that truly qualifies as a must-have for connoisseurs of comedy. The collection contains the sound films that Laurel and Hardy made for producer Hal Roach, the man who teamed the simpering English vaudeville player and the rotund American actor in the first place (although their laughs are evenly divided, Laurel was the creative force and chief gag-inventor of the duo). Their track record is proof that it isn't merely the jokes that make for comic success; it's the personalities of the comedians. Thus, Stan's dimwitted innocence and Ollie's perpetually exasperated reactions (raised to an exquisite art by Hardy's comprehensive glances at the camera, assuring the audience's complicity in his misery) are the essence of their success. Some films are great, some merely passable, but all stick blissfully to character. This is on glorious display through these Roach pictures, whether it's the boys sharing one small train berth in Berth Marks, executing their famous synchronized dance in Way Out West, or laboring to get that piano up a very steep flight of stairs in the Oscar-winning The Music Box.

The films look as good as movies from 1929 to 1940 can reasonably be expected to look. Included in the boxed set are seven foreign-language films (six in Spanish, one in French), shot in order to keep the duo popular in overseas markets, before dubbing made that goal easier. Fascinatingly, these films often extend the English-language films they are ostensibly adapted from, with different gags and plot turns--and it's fun to hear Stan and Ollie speaking in another language. Special features include a ho-hum 40-minute tribute with testimonials from fellow comedians (especially talkative are Dick Van Dyke and Jerry Lewis); an ""Interactive Map"" with Los Angeles location sites from their movies; three Roach shorts in which L&H pop up in cameos; and a 1942 short produced for the Department of Agriculture (another L&H cameo). A few (not many) films have commentaries that include the informed Laurel and Hardy buff Richard W. Bann; Sons of the Desert has a track with Tim Conway and Chuck McCann, who don't seem to know how a commentary track works but have a nice time watching the movie. --Robert Horton"