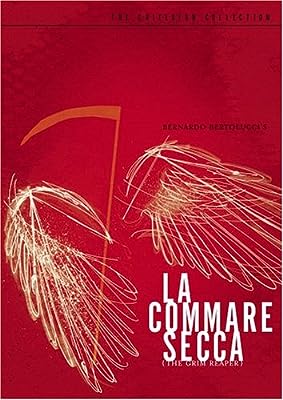 Price: $22.99
As of 2022-12-06 10:23:25 UTC (more info)
Product prices and availability are accurate as of 2022-12-06 10:23:25 UTC and are subject to change. Any price and availability information displayed on http://www.amazon.com/ at the time of purchase will apply to the purchase of this product.
Availability: Not Available - stock arriving soon
Buy Now from Amazon
Product Information (more info)
CERTAIN CONTENT THAT APPEARS ON THIS SITE COMES FROM AMAZON SERVICES LLC. THIS CONTENT IS PROVIDED 'AS IS' AND IS SUBJECT TO CHANGE OR REMOVAL AT ANY TIME.

The brutalized corpse of a Roman prostitute is found along the banks of the Tiber. The police round up and interrogate a handful of possible suspects. In this, his stunning debut feature—based on a story by Pier Paolo Pasolini—Bernardo Bertolucci utilizes a series of interconnected flashbacks to explore the nature of truth and the reliability of narrative. The Criterion Collection is proud to present La commare secca, the first full realization of a legendary talent.

Signaling the arrival of a gifted young filmmaker, La commare secca (or The Grim Reaper) marked the promising debut of Bernardo Bertolucci, who would attain world-class prominence in less than a decade. Having served as director's assistant on his friend Pier Paolo Pasolini's successful debut Accattone the previous year, Bertolucci was only 21 when he co-wrote and directed this impressively structured drama (based on a story by Pasolini) about a murdered prostitute and the police interrogation of several potential suspects. Bertolucci has denied the influence of Kurosawa's Rashomon (which he hadn't yet seen), but that film's prismatic structure is echoed here in the chapter-like retelling of circumstances surrounding the murder, as described through the suspects' unclear memories, conflicting testimonies and subtly hidden agendas. Punctuating the mystery with scenes of the prostitute's final hours, Bertolucci defies his directorial assignment (Pasolini had declined the job, and Bertolucci was hired to approximate Pasolini's visual style) with an ever-moving camera that tracks each suspect through a variety of ominous Roman locations. As he explains in an exclusive interview on this Criterion DVD, Bertolucci was the youngest person on the set, and extremely anxious as a first-time director, but his talent speaks for itself. La commare secca was not a hit with critics, but it's a remarkable debut by any standard, fully vindicated by Bertolucci's subsequent greatness. --Jeff Shannon