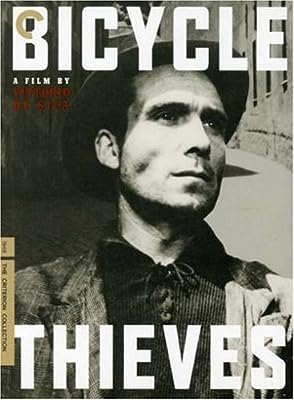 Price: $24.02
As of 2021-07-26 11:08:33 UTC (more info)
Product prices and availability are accurate as of 2021-07-26 11:08:33 UTC and are subject to change. Any price and availability information displayed on http://www.amazon.com/ at the time of purchase will apply to the purchase of this product.
Availability: Not Available - stock arriving soon
Buy Now from Amazon
Product Information (more info)
CERTAIN CONTENT THAT APPEARS ON THIS SITE COMES FROM AMAZON SERVICES LLC. THIS CONTENT IS PROVIDED 'AS IS' AND IS SUBJECT TO CHANGE OR REMOVAL AT ANY TIME.

The Bicycle Thieves (or The Bicycle Thief) is a story of humanity and love that has touched so many people around the world because of its powerful simplicities Ricci is an unemployed man in the depressed post-WWII economy of Italy, who at last gets a good job which can support his family. It is a job hanging up posters for which having a bicycle is an important necessity. But soon enough his bicycle is stolen and he and his son Bruno walk the streets of Rome, in search for it. The Bicycle Thieves touches upon universal issues of the human condition, portraying humans as genuinely flawed people who are vulnerable and when put under strenuous circumstances, will break down and do what is necessary to survive.

A poor man and his son search Rome for the stolen bicycle he needs to go to work.

Vittorio De Sica's remarkable 1947 drama of desperation and survival in Italy's devastating post-war depression earned a special Oscar for its affecting power. Shot in the streets and alleys of Rome, De Sica uses the real-life environment of contemporary life to frame his moving drama of a desperate father whose new job delivering cinema posters is threatened when a street thief steals his bicycle. Too poor to buy another, he and his son take to the streets in an impossible search for his bike. Cast with nonactors and filled with the real street life of Rome, this landmark film helped define the Italian neorealist approach with its mix of real life details, poetic imagery, and warm sentimentality. De Sica uses the wandering pair to witness the lives of everyday folks, but ultimately he paints a quiet, poignant portrait of father and son, played by nonprofessionals Lamberto Maggiorani and Enzo Staiola, whose understated performances carry the heart of the film. De Sica and scenarist Cesare Zavattini also collaborated on Shoeshine, Miracle in Milan, and Umberto D, all classics in the neorealist vein, but none of which approach the simple poetry and quiet power achieved in The Bicycle Thief. --Sean Axmaker

On the DVD
The two-disc Criterion DVD of Bicycle Thieves is most significant for its fine digitally restored print quality, a marked improvement over previous video editions of the film. Now the beauties of this devastating masterpiece of Italian Neorealism shine through anew: the richness of the locations, the simple clarity of the performances, the heartbreaking details of the daily lives of the dispossessed. No commentary track, but a first-rate booklet gives a primer on the movie, with critical appreciations (including a classic take by Andre Bazin), a bell-ringing Neorealist manifesto by screenwriter Cesare Zavattini, and a variety of memoirs on the making of the film, including one by director Vittorio De Sica. A second disc has three well-chosen extras. Life as It Is: The Neorealist Movement in Italy is a useful 40-minute intro to the general subject of postwar Italian cinema. Working with De Sica is a 22-minute doc with reminiscences from surviving members of the Bicycle Thieves cast and crew, including Enzo Staiola, the unforgettable little boy who was plucked out of a crowd to star in the film. A 55-minute documentary on the life of Zavattini, made for European TV, gives background on this feisty leading light of Neorealism; testimony is offered by Bernardo Bertolucci and Roberto Benigni, among others. By the way, for years the film was known in the U.S. as The Bicycle Thief, but if you re-visit it you'll be struck by how shatteringly appropriate the restoration of the original plural is. --Robert Horton

The Bicycle Thieves contains striking images of the city of Rome that the characters of Ricci and Bruno inhabit when searching for their bicycle. The bicycle in the story can be looked at as a justification to describe the lives of all the struggling working class people in Post World War II Italy. With the haunting use of Neorealism aesthetics, the gritty streets of Rome and the poverty of its surroundings are in many ways a third lead character within the context of the story; as the bleak urban images sheds powerful understanding of its place and time within history. The story of The Bicycle Thieves can also be viewed as a social and political commentary on the poverty of Postwar Italy during the late 1940’s, as you see survivors after a devastating war trying to rebuild, start over and live once again.