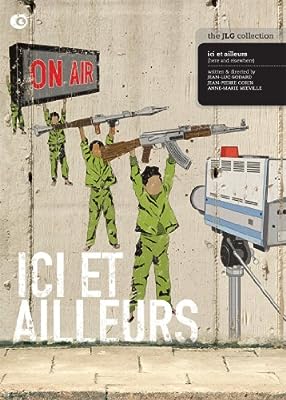 Price: $17.99
As of 2021-09-23 21:39:13 UTC (more info)
Product prices and availability are accurate as of 2021-09-23 21:39:13 UTC and are subject to change. Any price and availability information displayed on http://www.amazon.com/ at the time of purchase will apply to the purchase of this product.
Availability: Not Available - stock arriving soon
Buy Now from Amazon
Product Information (more info)
CERTAIN CONTENT THAT APPEARS ON THIS SITE COMES FROM AMAZON SERVICES LLC. THIS CONTENT IS PROVIDED 'AS IS' AND IS SUBJECT TO CHANGE OR REMOVAL AT ANY TIME.

Jean-Luc Godard (Breathless) initiated his radical video period with this startling film that combines videotape and film, enabling him to superimpose more than two images simultaneously. Made as part of the "Dziga Vertov Group", with Jean-Pierre Gorin and Anne-Marie Mi‚ville, the film was commissioned by the Palestinians and originally titled Until Victory. The film's original purpose was to examine life in the Palestinian camps. But following the defeat of the Palestinian army in the Six Day War, Ici et Ailleurs was radically transformed becoming a meditation on how cinema records history. Godard, Gorin and Mi‚ville contrast a French family (Here) with an impressionistic portrait of Palestine (Elsewhere) reflected and transmitted by television, books and pictures.