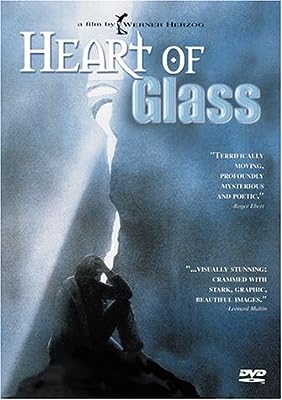 Price: $54.99
As of 2021-07-31 06:58:57 UTC (more info)
Product prices and availability are accurate as of 2021-07-31 06:58:57 UTC and are subject to change. Any price and availability information displayed on http://www.amazon.com/ at the time of purchase will apply to the purchase of this product.
Availability: Not Available - stock arriving soon
Buy Now from Amazon
Product Information (more info)
CERTAIN CONTENT THAT APPEARS ON THIS SITE COMES FROM AMAZON SERVICES LLC. THIS CONTENT IS PROVIDED 'AS IS' AND IS SUBJECT TO CHANGE OR REMOVAL AT ANY TIME.

Heart of Glass - A small village is renowned for its "Ruby Glass" glass blowing works. When the owner of the works dies suddenly without revealing the secret of the Ruby Glass, his son tries to recreate it. In order to create the proper atmosphere of trance and sleepwalking, the entire case acted under hypnosis.

In his tireless crusade to expand the vocabulary of cinema, Werner Herzog turned Heart of Glass into a bold and challenging experiment. By placing all but one of his actors under hypnosis, Herzog achieved his desired effect, eliciting performances that seem oddly detached and trancelike, perfectly appropriate to a story about 19th-century Bavarian villagers who have lost their collective vision, cast adrift and descending into madness. They've lost the life-sustaining secret to the magical ruby-red glass that was once made in the local glassworks, and their predicament cannot be solved by the mystic (Josef Bierbichler, the only actor not hypnotized) who appears with premonitions of the fate of all humankind. All of this is mere pretense for Herzog's loftier (and not altogether successful) ambition: to present haunting, mysterious images that seem directly drawn from our collective subconscious. In his visionary defiance of conventional narrative, Herzog crafted a timeless, mesmerizing allegory, and one of the most eerily beautiful films ever made. --Jeff Shannon