Heaven Can Wait (The Criterion Collection) 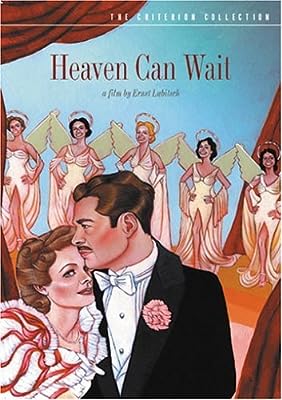 Price: $18.01
As of 2021-12-02 15:49:46 UTC (more info)
Product prices and availability are accurate as of 2021-12-02 15:49:46 UTC and are subject to change. Any price and availability information displayed on http://www.amazon.com/ at the time of purchase will apply to the purchase of this product.
Availability: Not Available - stock arriving soon
Buy Now from Amazon
Product Information (more info)
CERTAIN CONTENT THAT APPEARS ON THIS SITE COMES FROM AMAZON SERVICES LLC. THIS CONTENT IS PROVIDED 'AS IS' AND IS SUBJECT TO CHANGE OR REMOVAL AT ANY TIME.

On the day of his death in 1943, the spirit of Henry Van Cleave (Don Ameche) obligingly heads for the place where so many people had previously told him to go. The immaculately dressed septuagenarian arrives at the outer offices of Hades, where he is greeted by His Excellency (Laird Cregar), the most courteous and gentlemanly Satan in screen history. His Excellency doubts that Van Cleave has sinned enough to qualify for entrance into Hades, but Henry insists that he's led the most wicked of lives, and proceeds to tell his story. Each milestone of Henry's life, it seems, has occurred on one of his birthdays. Upon reaching 15, Henry (played as a teenager by Dickie Moore) naively permits himself to get drunk with and be seduced by his family's French maid (Signe Hasso). At 21, Henry elopes with lovely Martha Strabel (Gene Tierney) stealing her away from her stuffy fiance Albert Van Cleve (Allyn Joslyn), Henry's cousin. At 31, Henry nearly loses Martha when, weary of his harmless extracurr

The last masterwork by Ernst Lubitsch--whose other gems include Trouble in Paradise, Lady Windermere's Fan, Ninotchka, and The Shop Around the Corner--Heaven Can Wait was nominated for best picture and director Oscars in its day but largely neglected thereafter. Partly it's a matter of no one expecting a 1943 Fox movie featuring Don Ameche, the star of so many bland Technicolor musicals at that studio, to be a comedy of rare loveliness. Also, there's the confusion engendered by the existence of another film with the same title: the 1978 Warren Beatty movie that was the remake of a classic '40s comedy-fantasy--but Here Comes Mr. Jordan, not Heaven Can Wait. It's high time to get our priorities straight.

Following his demise, the aristocratic Henry Van Cleve (Ameche), having no hope of Paradise, betakes himself "where all his life so many people had told him to go." Hell, or at least its antechamber, would appear to be a luxury hotel in neoclassical mode, and--this is a Lubitsch movie, after all--His Satanic Excellency (Laird Cregar) is a perfect gentleman and the most gracious of hosts. To establish his credentials for spending eternity there, Henry begins to narrate a life which, though lacking any notable crimes, "has been one continuous misdemeanor."

Centered in a Fifth Avenue mansion left over from 19th-century New York, the film is Lubitsch and writing partner Samson Raphaelson's valentine to "an age that has vanished, when it was possible to live for the charm of living." Spanning more than half a century, it chronicles the high points of Henry's life so delicately that--in a variation on the strategies of Lubitsch-Raphaelson's risque '30s classics--it leaves some of them entirely offscreen, their emotional impact measured by what the characters feel and say about them afterward. We'll leave it to you to find out what they are. Suffice it to say that Ameche and Gene Tierney--as Martha, the love of Henry's life--give performances far subtler than anything else in their Fox contract-player careers, and there are sublime opportunities for those peerless character actors Charles Coburn, Eugene Pallette, and Marjorie Main. --Richard T. Jameson