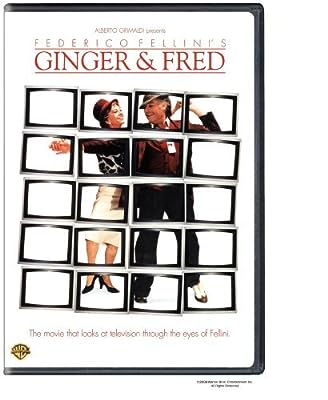 Price: $13.99
As of 2023-02-01 06:31:36 UTC (more info)
Product prices and availability are accurate as of 2023-02-01 06:31:36 UTC and are subject to change. Any price and availability information displayed on http://www.amazon.com/ at the time of purchase will apply to the purchase of this product.
Availability: Not Available - stock arriving soon
Buy Now from Amazon
Product Information (more info)
CERTAIN CONTENT THAT APPEARS ON THIS SITE COMES FROM AMAZON SERVICES LLC. THIS CONTENT IS PROVIDED 'AS IS' AND IS SUBJECT TO CHANGE OR REMOVAL AT ANY TIME.

The legendary Federico Fellini, Oscar®-nominated 12 times for such films as "La Dolce Vita" and "8-1/2," skewers society in general and TV in particular with this nostalgic tribute to the past that won a Golden Globe® as Best Foreign Language Film. Starring Giulietta Masina (Mrs. Fellini) and frequent Fellini leading man Marcello Mastroianni, the film tells the story of two retired performers, Amelia and Pippo, who once wowed crowds with their dance recreations of Fred Astaire and Ginger Rogers and are now reuniting for a nationwide TV special. The New York Times' Vincent Canby said the movie "ranks with the best work Mr. Fellini has ever done." In Italian with English subtitles.

In 1986, Federico Fellini's satiric take on television vulgarianism might have been considered, well, Fellini-esque. Today, the grotesque commercials and insipid game shows he depicts pale next to reality. Billed in their heyday as Ginger & Fred, Ameilia (Giulietta Masina) and Pippo (Marcello Mastroianni) are reunited after 30 years to perform their Rogers-Astaire ballroom dance tribute act on We Are Proud to Present, a television variety show. Amelia is now a widowed grandmother. Pippo has gone somewhat to seed. Can they recapture the magic amidst this surreal circus of transvestites, midgets, and a Ronald Reagan impersonator? Ginger & Fred works best when Amelia and Pippo's bittersweet reunion is center stage, thanks to the impeccable charm and grace of Masina (La Strada) and the incomparable Mastroianni (La Dolce Vita), two actors most closely associated with the director. Ginger & Fred is as much a tribute to artists ("benefactors of humanity," someone notes at one point) as it is to the ephemeral state of cinema itself. "We are phantoms," Pippo tells his partner. "We arise from the darkness and disappear again." Like Pippo, Fellini makes a few missteps, but Ginger & Fred is ultimately quite moving ("Bravo," a fan congratulates Amelia. "You made me cry."), with an unforgettable train station finale. Fellini made only two more films, but Ginger & Fred would have made a fitting swan song. --Donald Liebenson