I Vitelloni (The Criterion Collection) 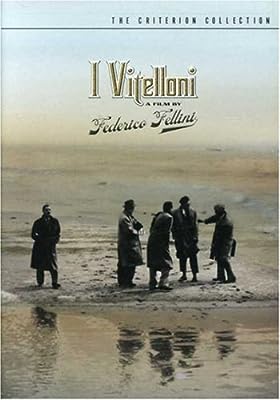 Price: $18.01
As of 2022-12-07 00:27:26 UTC (more info)
Product prices and availability are accurate as of 2022-12-07 00:27:26 UTC and are subject to change. Any price and availability information displayed on http://www.amazon.com/ at the time of purchase will apply to the purchase of this product.
Availability: Not Available - stock arriving soon
Buy Now from Amazon
Product Information (more info)
CERTAIN CONTENT THAT APPEARS ON THIS SITE COMES FROM AMAZON SERVICES LLC. THIS CONTENT IS PROVIDED 'AS IS' AND IS SUBJECT TO CHANGE OR REMOVAL AT ANY TIME.

Italian maestro Federico Fellini's first international success is a nakedly autobiographical film that bears many of the formal and thematic concerns that recur throughout his work. Set in the director's hometown of Rimini, I Vitelloni follows the lives of five young vitelloni, or layabouts, who while away their listless days in their small seaside village. Fausto (Franco Fabrizi), the leader of the pack, marries his sweetheart, but finds himself constantly distracted by other women. Meanwhile, would-be playwright Leopoldo (Leopoldo Trieste) continues work on his dreary plays, dreaming of staging them one day. Clownish Alberto (Alberto Sordi) still lives at home with his mother and sister, Olga (Claude Farell), while boasting of preserving the family honor by watching over her. While the movie seems to pay little attention to Riccardo (Riccardo Fellini) and Moraldo (Franco Interlenghi), the latter eventually emerges as its key character, plainly serving as Fellini's alter ego. Stuck in

Federico Fellini's breakthrough film, the 1953 I Vitelloni, is one of the cinema's seminal stories about slacker males, and a highly entertaining one at that. Following the unfortunate failure of his comedy The White Sheik, Fellini prepared to shoot La Strada (he would release that early masterpiece in 1954), but decided at the last minute to make an autobiographical feature about mischievous, drifting, 30-ish losers in a small, seaside town. I Vitelloni clicked with international audiences and remains an obvious influence on such later classics as Breaking Away and Diner. But there's nothing like Fellini's almost self-mocking fusion of gritty neo-realism with the audacious, illusionary style he would later be entirely linked. The ensemble comedy follows the ever-diminishing fortunes of five young men who can't define, let alone jump-start, their dreams, particularly the caddish Fausto (Franco Fabrizi), who thinks nothing of molesting the wife of his father-in-law's best friend. --Tom Keogh