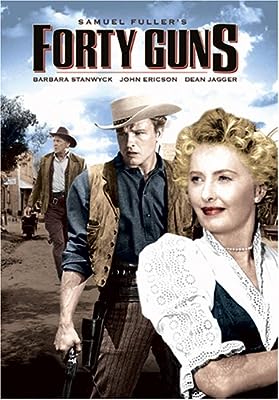 Price: $14.98
As of 2021-07-26 04:28:35 UTC (more info)
Product prices and availability are accurate as of 2021-07-26 04:28:35 UTC and are subject to change. Any price and availability information displayed on http://www.amazon.com/ at the time of purchase will apply to the purchase of this product.
Availability: Not Available - stock arriving soon
Buy Now from Amazon
Product Information (more info)
CERTAIN CONTENT THAT APPEARS ON THIS SITE COMES FROM AMAZON SERVICES LLC. THIS CONTENT IS PROVIDED 'AS IS' AND IS SUBJECT TO CHANGE OR REMOVAL AT ANY TIME.

An Arizona rancher rules with her cowboy army until a U.S. marshal and his brothers come to town.

Forty Guns is the most rampantly sexualized Western ever made, and the most outrageous of Samuel Fuller's late-'50s B movies. Fuller's original title was "Woman with a Whip," referring to the hard-riding range baroness--Barbara Stanwyck, sporting silver hair and (most of the time) black, skintight man togs--who's "the boss of Cochise County" and a law unto herself. The forty guns are an army of pistoleros who accompany her just about everywhere, and Fuller misses no opportunity to exaggerate their macho assertiveness in black-and-white CinemaScope, whether thundering along the horizon or formed up on either side of a preposterously long dinner table with Stanwyck at its head. Barry Sullivan costars as a Wyatt Earp–like gunfighter who both threatens Stanwyck's empire and awakens her lust for something besides power. As one of his brothers, Gene Barry (soon to star in Fuller's mind-blowing Vietnam movie China Gate) enjoys a passionate liaison with a gunsmith's busty blond daughter (Eve Brent) whom he romances down the bore of a rifle--an image Jean-Luc Godard would memorialize in Breathless. In the relentlessly double-entendre dialogue and the blocking of scenes, everything takes on sexual overtones: power and impotence, political advantage and exclusion. Fuller and cameraman Joseph Biroc capture many sequences in single, minutes-long takes that often end in a death--and in one perverse instance, the revelation of a death that has occurred midway through without our knowing it. (It's a T.S. Eliot moment, though we won't insist on it.) Style is all in this movie, which will leave you either astonished or aghast. More likely, both. --Richard T. Jameson